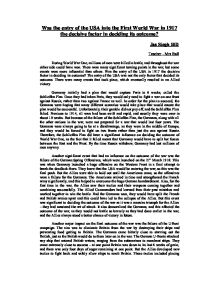 Was the entry of the USA into the First World War in 1917 the decisive factor in deciding its outcome?

Was the entry of the USA into the First World War in 1917 the decisive factor in deciding its outcome? Jas Singh 10D Teacher - Mrs Ball During World War One, millions of men were killed in battle, and throughout the war either side could have won. There were many significant turning points in the war, but some events were more influential than others. Was the entry of the USA in 1917 the decisive factor in deciding its outcome? The entry of the USA was not the only factor that decided its outcome. There were many events that took place, which eventually resulted in an Allied victory. Germany initially had a plan that would capture Paris in 6 weeks, called the Schlieffen Plan. Once they had taken Paris, they would only need to fight a war on one front against Russia, rather than two against France as well. In order for the plan to succeed, the Germans were hoping that many different scenarios would take place that would ensure the plan would be successful. Unfortunately, their gamble did not pay off, and the Schlieffen Plan failed. Previous to 1914, all wars had been swift and rapid, and usually they were over in about 10 weeks. ...read more.

This was awful news for the Germans, as now they were beginning to lose support for the war, and things were looking bleak. Also, it affected the military, as the blockade meant that essential supplies such as bullets, chemicals and artillery shells could not be provided for the German front line. This would have had a fairly significant impact on the outcome of the war, as the Germans would now have a limited supply of resources and they would eventually have to succumb to defeat. There were also other events that were important factors in deciding the outcome of the war. One of the main reasons Germany lost the war was because of the strengths and weaknesses of her allies, compared to those of the French and British. Germany's allies, Turkey, Italy and Austria-Hungary were weak compared to the alliance of Britain, France and the USA. Germany's allies did very little fighting, and the battles they did fight they usually lost. Whereas the British and Americans would regularly supply their men to the French, Germany's allies were more reluctant to do so. An example of the Allies supporting each other was shown when the USA entered the war to help their allies. ...read more.

There were many different factors that decided the outcome of the First World War, but there were some factors that were more decisive than others. In conclusion, yes, I do believe that the entry of the USA into the First World War in 1917 was the decisive factor in deciding its outcome. I believe this because at the time that they entered, the Russians had just left the war and so the Allies looked doomed. But the entry of the USA supplied men, munitions, money and a much needed morale boost to the French and the British respectively. The Allies would not have survived the Spring Offensives without the aid of the brave American fighters. The well-trained, disciplined and well-armed Americans were vital to the Allied war effort and without American intervention, the Germans would have defeated France and Britain and they would claim victory. Of course, the entry of the USA alone would have not been enough to win the war, and it took a series of other events to take place to fully ensure victory for the Allies. But it is my firm belief that the American entry into the war in 1917 was the decisive factor in deciding its outcome. ...read more.