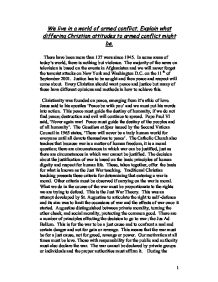 We live in a world of armed conflict. Explain what differing Christian attitudes to armed conflict might be. There have been more than 127 wars since 1945. In some areas of today's world, there is nothing but violence. The majority of the news on television is based on the events in Afghanistan and we will never forget the terrorist attacks on New York and Washington D.C. on the 11th of September 2001. Justice has to be sought and then peace and respect will come about. Every Christian should want peace and justice but many of these have different opinions and methods in how to achieve this. Christianity was founded on peace, emerging from it's ethic of love. Jesus said to his apostles 'Peace be with you' and we must put his words into action. This peace must guide the destiny of humanity, if we do not find peace; destruction and evil will continue to spread. Pope Paul VI said, 'Never again war! Peace must guide the destiny of the peoples and of all humanity'. The Gaudium et Spes issued by the Second Vatican Council in 1965 states, 'There will never be a truly human world for everyone until all devote themselves to peace'. The Catholic Church also teaches that because war is a matter of human freedom, it is a moral question; there are circumstances in which war can be justified, just as there are circumstances in which war cannot be justified. The decision about the justification of war is based on the basic principles of human dignity and respect for human life. ...read more.

There are four beliefs behind these crusades, the reason for the war is a holy one, God will guide and lead the armies, the crusades are on God's side: the enemies are against God, and finally, the war must be carried on to the bitter end. All the crusades think that God was on their side and the Jews were expecting a 'Holy War' when they were expecting a 'Military Messiah'. However, they did not get this fighting leader; instead they got a peaceful and loving leader who did not resort to violence. Jesus rejected violence and he taught that we should 'love our neighbour'. He said that God loves everyone, he does not hate the enemies and he taught us to love our enemies. Some Christians think that war is acceptable because it is our duty to defend the innocent and the most vulnerable. On many occasions Jesus defends the vulnerable because of their faith in God. He cured the woman with a haemorrhage, Jairus' daughter, the man with the withered hand and the epileptic boy because of their faith. Jesus also healed these because they were all innocent and Jesus felt compassion and sympathy for them. These Christians who think that it is our duty to defend the innocent believe that if the innocent and vulnerable are killed or hurt in war that justice should be sought and sometimes these Christians think that the only way that justice can come about is to go into war. They choose this as the lesser of two evils. ...read more.

This illustrates how much nuclear weapons the world has and how much destruction a percentage of it can cause. However, there are some Christians who think that nuclear war can be justified. There are also many arguments in favour of nuclear war. Firstly, many Christians think that the ends justify the means, peace can be achieved by nuclear war but we must make sure that this is genuine peace, not peace of a threatening nature. By using nuclear weapons in war, lives can be saved. After the Hiroshima bombing Stimson said that there would have been more lives lost if there was a long war and what they did saved lives. Nuclear war is quick and effective. Also, there have been no world wars since nuclear bombs were invented, this could be because they are scared to fire at each other in case they miss or because some peace has been found. If there is a war and you break the enemies will to fight, the war would be over and fewer lives would be lost. Taking all of these Christian views into consideration, I think that there are more valid arguments against nuclear war than there are for nuclear war. Even taking one life is serious, so, if a nuclear weapon can kill thousands and thousands of people this is horrific. War is never good; even if it is made shorter it is just as bad as you are doing an act of evil. However, the world will continue to hold nuclear weapons and the supply will continue to build up. We just have to hope that none need to be fired. ...read more.