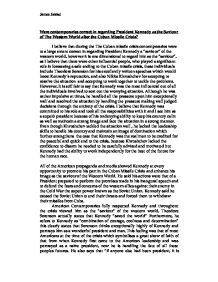 Were contemporaries correct in regarding President Kennedy as the Saviour of The Western World after the Cuban Missile Crisis?

Were contemporaries correct in regarding President Kennedy as the Saviour of The Western World after the Cuban Missile Crisis? I believe that during the The Cuban missile crisis contemporaries were to a large extent correct in regarding President Kennedy a "saviour" of the western world, however it is one dimensional to regard him as the "saviour", as I believe that there were other influential people, who played a significant role in foreseeing a safe ending to the Cuban missile crisis, these individuals include Theodore Sorenson for his excellently written speeches which would boost Kennedy's reputation, and also Nikita Khrushchev for accepting to resolve the situation and accepting to work together to tackle the problems. However, It is still fair to say that Kennedy was the most influential out of all the individuals involved to sort out the worrying situation. Although he was rather impulsive at times, he handled all the pressure upon him exceptionally well and resolved the situation by handling the pressure making well judged decisions through the entirety of the crisis. I believe that Kennedy was committed to his role and took all the responsibilities with it and I see him as a superb president because of his undenying ability to keep his country calm as well as maintain a strong image and face the situation in a strong manner. ...read more.

Kennedy acting as defender of security of the USA and the western hemisphere in conjunction with congress and the constitution directed initial steps to be taken immediately, he outlined these in a speech given on 26th October 1961 on television. "First, to half this offensive build up, a strict quarantine of all military equipment under shipment to Cuba is being initiated. Second I have directed the continued and increased close surveillance and it's military build up. Third, it shall be the policy of this nation to regard any nuclear missile launched from Cuba against any nation in the western hemisphere as an attack from the Soviet Union on the United States, requiring a full retaliatory response on the Soviet Union." Kennedy's initial response to the Soviet aggression showed reasonable restraint and a genuine concern to maintain world peace. During the crisis he chose a diplomatic course of action, which was less likely to result in nuclear war. He did not authorise American armed forces to invade or bomb Cuba but chose to blockade the island of Cuba, this would keep the opportunity to negotiate with the Soviet Union open and result in a peaceful end to the crisis. The Soviet Union emerged in a weaker state following the Cuban Missile Crisis. ...read more.

This situation made Cuba more reliant on the Soviet Union. President Degaulle of France pulled his country out of NATO and encouraged other Western European country's to do the same, as they had not been consulted during the emergency. Kennedy was not as strong as the American propaganda implied because behind the scenes he was discussing concessions and negotiating with the Soviets. On 27th October 1963 Robert Kennedy (President Kennedy's brother) met with the Soviet ambassador Anatoly Dobrynin. The conversation, which took place, was the solution to the crisis. An ultimatum was given, that if the Russian's did not remove their missiles by the next day the American's would destroy them, but if they were removed the American missiles in Turkey would then be removed. The ambassador contacted Khrushchev and on 28th October Robert Kennedy was informed that the missiles would be withdrawn from Cuba and the crisis was over. President Kennedy's interventions in the Cuban Missile Crisis did not bring about the end of the Cold War or prevent the fear of a nuclear war ever taking place. He was not solely responsible for saving the western world from the Cuban Missile Crisis turning into a nuclear war but played a part along with others. The Cold War and super-power opposition continued until 1991 when the Union of Soviet Socialist Republics (U.S.S.R.) came to an end under presidency of Mikhael Gorbachev. ?? ?? ?? ?? James Jawad ...read more.