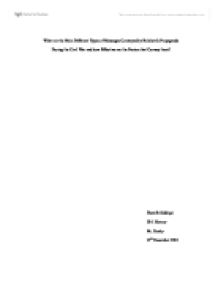 What are the Main Different Types of Messages Conveyed by Bolshevik Propaganda During the Civil War and how Effective are the Posters that Convey them?

This grabs attention. The bold word "you" in the top right corner draws the eyes towards the soldier, from where the eyes shift down to the caption of the poster; the caption reads "Have you enrolled as a volunteer?". The industrial background symbolizes the start of a new era that the Bolsheviks have brought about with their revolution and this causes the poster to appeal to the audience even more because they now feel they have to defend this new and favorable change. The soldier himself can be seen as a very plain and simple man. This urges others to enroll as well, shaming them into doing so. It causes the question "If he can enroll, why can't I?" to float within their minds. The need for the effectiveness of this poster was greatly emphasized by the fact that the Bolsheviks relied heavily on volunteering as a form of recruitment, compared to conscription. Such propaganda as Moor's is an effective method of conveying a message to an audience. Moor's message here fits into the category of asking for the public's help and support so that the Reds can strengthen their side. ...read more.

It was important for such a poster to be published at the time, because the Bolsheviks were coming fresh from overthrowing the Provisional Government. The Russian people were still confused as to which side to be on, and this poster reassured millions that the Bolsheviks were the side to support. Having this support at the start of the Civil War was crucial because it meant that the Reds had some support and could hopefully build on that, whereas the Whites had to struggle to gain any support they could get. CONCLUSION During the Civil War, from 1918 to 1920, the Bolsheviks used a great amount of propaganda. This propaganda can be categorized in two groups, meaning that any propaganda that the Bolsheviks created either presented a new idea or expanded on a previous one and in the process gained public support, or it asked for the help of the public so that the Bolsheviks could defeat the Whites. The types of posters used were also quite effective, using a blend of striking imagery, simplicity, directness and boldness to convey their message. The imagery and directness of Bolshevik propaganda made sure that the messages stayed inside the audience's minds for many years to come. ...read more.