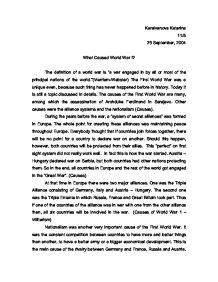 What Caused World War I?

Karaivanova Katerina 11/5 29 September, 2004 What Caused World War I? The definition of a world war is "a war engaged in by all or most of the principal nations of the world."(Merriam-Webster) The First World War was a unique even, because such thing has never happened before in history. Today it is still a topic discussed in details. The causes of the First World War are many, among which the assassination of Archduke Ferdinand in Sarajevo. Other causes were the alliance systems and the nationalism (Causes). During the years before the war, a "system of secret alliances" was formed in Europe. The whole point for creating these alliances was maintaining peace throughout Europe. ...read more.

(Causes of World War 1 - Militarism) Nationalism was another very important cause of the First World War. It was the constant competition between countries to have more and better things than another, to have a better army or a bigger economical development. This is the main cause of the rivalry between Germany and France, Russia and Austria. The tension between the different nations in Europe became so great that only a little problem was enough to cause a war. (Causes) The third cause for the First World War was perhaps the one that had immediate effect on the start of the war. This was the assassination of the Archduke Ferdinand from Austria - Hungary. ...read more.

Great Britain and France joined their allies because they were obliged to do so by the Alliances. With Britain all her colonies and dominions also joined the war, which ultimately made it a World War. United States wanted to remain neutral but was forced to join the war. Japan had a military agreement with Britain and declared war on Germany. Italy was the only country from the Alliances that sneaked out of the war, although it was bounded in the Alliance with Germany and Austria - Hungary. (Feature) The First World War was an immense event that affected many countries throughout the world. Many countries probably did not want to enter the war but were obliged to by treaties or forced to do so. The causes for that war were many but each small event just added up until the problem grew too big to avoid. ...read more.