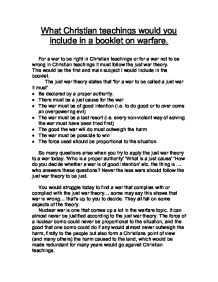 What Christian teachings would you include in a booklet on warfare.

the harm caused to the land, which would be made redundant for many years would go against Christian teachings. There are many references in the bible that have a certain, war related meaning, or at least you can relate them to war. The reference 'thou shalt not kill' (exodus 20) says that obviously 'you should not kill'. There is rarely a war where anyone is not killed, so again you could say that wars in which people are killed are wrong. According to this, it would be near impossible for nuclear war to be right, as you would find it near impossible to use nuclear weapons without killing anyone! It is known that the blast from the Hiroshima bomb spread radiation for 36miles around, and today, the power of one bomb has increased 750,000 fold from that of the Hiroshima bomb. ...read more.

the circle would never end. The bible also speaks of the 'Crusade' or 'Holy War' (in the book of Exodus). In this reference "The Lord is a warrior; the Lord is his name", it is however supporting war or suggesting that war is not wrong as the Lord God is a warrior himself. I am aware that a war does not have to involve killing because you can have governmental and other types where people do not die, but the majority of wars do involve killing in one way or another. In Exodus it says, "I will sing to the lord, because he has won a glorious victory", not necessarily saying that the Lord has killed at all, only that he was involved in the war. This would have to be included in the leaflet on warfare. It is not questioning the Lord, as it is not written that Christians should be against war. ...read more.