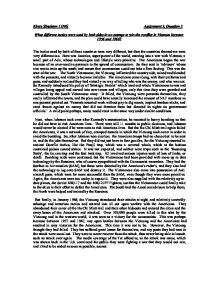 Kirsty Singleton 11MG Assignment 2, Question 2 What different tactics were used by both sides in an attempt to win the conflict in Vietnam between 1956 and 1968? The tactics used by both of these countries were very different, but then the countries themselves were very different too. Here was America, super-power of the world, entering into a war with Vietnam, a small part of Asia, whose technologies and lifestyle were primitive. The Americans began the war because of an over-reactive paranoia to the spread of communism. So they sent in 'advisors' whose aim was to train up the south, and ensure that communism could not take a firm footing. This was the start of the war. The North Vietnamese, the Vietcong, infiltrated the country side, mixed and blended with the peasants, and virtually became invisible. The Americans came along, with their uniforms and guns, and suddenly realised they had virtually no way of telling who was the enemy, and who was not. ...read more.

It was not expected, and neither were traps such as the 'Bouncing Betty', the tin can trap and the fuel tank trap. All involved serious injuries such of loss of limbs, or death. Bombing raids were continued, but the Vietnamese had been provided with more up to date technology by the Russians, who of course sympathised with the Communist wannabes. They had the Surface to Air missiles (SAM), but these were detected by the American's radar's, and they also had the technology to log onto SAM and destroy it. The Vietnamese also came into possession of Anti-aircraft guns, which were far more successful than the SAM, even though they were more primitive. Again, the Americans were too cocky to expect it. They were also supplied with the relatively up-to-date planes, the Soviet MIG-17 and the MIG-21PF Fighters, sot that the Vietnamese could finally take to the skies in their effort to defeat the Americans. ...read more.

Perhaps if the Americans had known the opinions of the NLF, they would have tried to coax another all out offensive, using it to pick off all those remaining in the NLF. The tactics used by the two sides in the war, were entirely different, yet it seems the primitive tactics of the NLF were the most successful. The U.S.'s bombing campaign was useless, the use of Napalm to uncover the Ho-Chi Minh trail was too, yet the Vietnamese who had managed to avoid these attacks quite effectively, used their own tactics and inspired fear into the hearts of American troops with their booby-traps and seeming invisibility. It leaves me in no two minds of whose tactics were the most successful, and it shows, as in the end, it was the Vietnam who really 'won' the war, because it was the Americans who called for a peace, and it was the Vietnamese who were calling the shots in the ensuing peace deal. That would not have happened, had the Americans tactics been more successful, would it? No. ...read more.