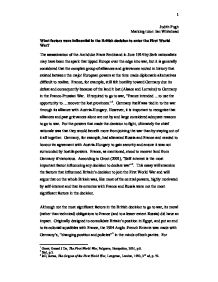 What factors were influential in the British decision to enter the First World War?

Judith Pugh Marking tutor: Ian Whitehead What factors were influential in the British decision to enter the First World War? The assassination of the Archduke Franz Ferdinand in June 1914 by Serb nationalists may have been the spark that tipped Europe over the edge into war, but it is generally considered that the complex group of alliances and grievances routed in history that existed between the major European powers at the time made diplomatic alternatives difficult to realize. France, for example, still felt hostility toward Germany due its defeat and consequently because of the land it lost (Alsace and Lorraine) to Germany in the Franco-Prussian War. If required to go to war, "France intended ...to use the opportunity to ...recover the lost provinces."1. Germany itself was tied in to the war through its alliance with Austria-Hungary. However, it is important to recognise that alliances and past grievances alone are not by and large considered adequate reasons to go to war. For the powers that made the decision to fight, ultimately the chief rationale was that they would benefit more from joining the war than by staying out of it all together. Germany, for example, had alienated Russia and France and needed to honour its agreement with Austria-Hungary to gain security and ensure it was not surrounded by hostile powers. France, as mentioned, stood to recover land from Germany if victorious. According to Groot (2001), "Self-interest is the most important factor influencing any decision to declare war"2. ...read more.

Given Britain's reluctance to enter war to assist a country with which they had fairly recently formed an Entente, it seems unlikely that concern over honouring an almost hundred year old treaty was Britain's principal reason for joining a major war. In this case it seems that public opinion played an important role in the British government's decision-making process. On July 31 Grey issued a warning to Germany declaring, "our attitude would be determined by public opinion here, and that the neutrality of Belgium would appeal very strongly to the public opinion here."9. Britain's quick response in defence of Belgium is in contrast to its attitude towards Russia. The apparently accidental sinking of some British fishing boats during the Russian-Japanese war by the Russian fleet, which was followed by, "a moment of violent anti-Russian feeling in Britain"10 may have reduced Russia's chances of immediate support from Britain. A key factor influencing Britain's decision to enter the war was a fear of growing German power in Europe. Their fast economic expansion coupled with the increase of her navy made her a potential threat to the British Empire. In particular it was the German naval expansion that worried Britain. Not only did German possession of a strong navy leave Britain itself in fear of attack and invasion (the British press contributed to this unease with "frequent references to Britain's 'secret and deadliest foe'"11), its imperial gains were now also at risk. ...read more.

Grey believed that if Britain did not honour its unofficial agreement with France then there would be a sense that Britain had, behaved meanly and left France in the lurch. The United States would despise us, Russia would not think it worth while to make a friendly arrangement with us about Asia, Japan would prepare to reinsure herself elsewhere. We should be left without a friend and without the power of making a friend.17 Britain's concern over maintaining the balance of power in Europe was clearly a concern over maintaining its own influence and standing and preventing Germany from taking over as a dominant economic power. The prospect of antagonising France, Russia, Japan and America by avoiding the war was made worse by Grey's belief that, "Germany would take some pleasure in exploiting the whole situation to our disadvantage"18. By no means did the British government desire war. Its failure to commit to a definite course of action until pushed by Germany's invasion of Belgium shows that in fact it was anxious to avoid war. Although there was some resentment towards Grey whom many believed had tied Britain to a secret treaty obligating Britain to come to France's aid. Ultimately, however, Britain was left without a choice. As asserted at the beginning of the essay, she was essentially motivated by self-interest. Crowe sums up the fundamental dilemma faced by Britain in 1914, Should this war come and England stand aside, one of two things must happen: (a) Either Germany and Austria win, crush France and humiliate Russia...What will be the position of a friendless England? (b) Or France and Russia win. ...read more.