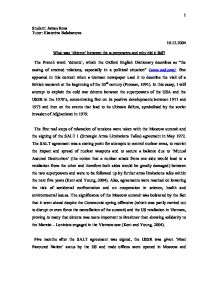 What was 'dtente' between the superpowers and why did it fail?

Student: James Ross Tutor: Ekaterina Balabanova 10.12.2004 What was 'd�tente' between the superpowers and why did it fail? The French word 'd�tente', which the Oxford English Dictionary describes as "the easing of strained relations, especially in a political situation" (www.oed.com), first appeared in this context when a German newspaper used it to describe the visit of a British monarch at the beginning of the 20th century (Froman, 1991). In this essay, I will attempt to explain the cold war d�tente between the superpowers of the USA and the USSR in the 1970's, concentrating first on its positive developments between 1971 and 1973 and then on the events that lead to its ultimate failure, symbolised by the soviet invasion of Afghanistan in 1979. The first real steps of relaxation of tensions were taken with the Moscow summit and the signing of the SALT 1 (Strategic Arms Limitations Talks) agreement in May 1972. The SALT agreement was a staring point for attempts to control nuclear arms, to restrict the impact and spread of nuclear weapons and to secure a balance due to 'Mutual Assured Destruction' (the notion that a nuclear attack from one side would lead to a retaliation from the other and therefore both sides would be greatly damaged) ...read more.

The highest point of superpower tension came after this though, as Israel made advances, the cease-fire broke down and Brezhnev issued a warning to Nixon that they would intervene. The U.S. reaction was to put their troops on high alert, warning Moscow not to intervene, and put pressure on Israel to comply with the cease-fire. A direct confrontation was thus avoided but "neither side was satisfied with the actions of the other" (Cohen, 1993, p.195). The Americans were disappointed about what they saw as an obvious Soviet attempt at trying to weaken the American position in the Middle East and the Soviets were frustrated by the outcome of the war and the way in which the US had forced them to back down (Cohen, 1993). Furthermore, one could say that the war showed the limits to which the superpowers could control the development of d�tente, as their links to other countries meant that any confrontation between those would lead to at least an indirect confrontation and cause tension. Following the war, Henry Kissinger's 'shuttle diplomacy', which effectively lead to a confirmation of the cease-fire after Months of talks and numerous visits to the Middle East, resulted in the sidelining of Soviet influence in the Middle East and to another major setback to d�tente. ...read more.

politicians in America, the Angolan war was another sign of Soviets not being interested in d�tente. Clearly, with such a different interpretation of the situation it is very hard to see how d�tente could ever develop at all. By 1976, the word d�tente had become so unpopular in America that President Ford prohibited his election team from using it (Kent and Young, 2004). As this shows, anti-d�tente sentiments were high in the U.S., with politicians doubting that American interests were being represented by persevering with it and the American people showing their opposition to it by voting Ford out in the election and replacing him with President Carter. President Carter, who won the election that year, believed in a more idealistic approach to foreign policy, focusing on human rights and as seen before, the Soviets saw this as interfering with their domestic issues. Also under Carter, the SALT 2 negotiations, probably the only sign of any d�tente left at all by 1979 stalled following the Soviet invasion of Afghanistan, were suspended. The 'Carter Doctrine' which followed showed the U.S. reverting back to a confrontational stance in the Cold War and in effect, with both sides now not showing any commitment to a relaxation in tensions, this was the confirmation of d�tente's failure. ...read more.