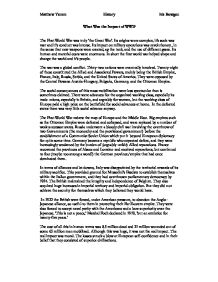 What Was the Impact of WW1?

What Was the Impact of WW1? The First World War was truly 'the Great War'. Its origins were complex, it's scale was vast and it's conduct was intense. Its impact on military operations was revolutionary, in the sense that new weapons were created, eg the tank, and the use of different gases. Its human and material costs were enormous. In short the first world war helped shape and change the world and it's people. The war was a global conflict. Thirty-two nations were eventually involved. Twenty-eight of these constituted the Allied and Associated Powers, mainly being the British Empire, France, Italy, Russia, Serbia, and the United States of America. ...read more.

In the defeated states there was very little social advance anyway. The First World War redrew the map of Europe and the Middle East. Big empires such as the Ottoman Empire were defeated and collapsed, and were replaced by a number of weak successor states. Russia underwent a bloody civil war involving the overthrow of two Governments (the monarchy and the provisional government) before the establishment of a Communist Soviet Union which put it beyond European diplomacy for quite some time. Germany became a republic who expected defeat, and they were increasingly weakened by the burden of (arguably unfair) ...read more.

But they did not achieve the security for themselves which they believed they would have. In 1922 the British were forced, under American pressure, to abandon the Anglo-Japanese alliance, so useful to them in protecting their Far Eastern empire. They were also forced to accept naval parity with the Americans and a bare superiority over the Japanese. 'This is not a peace,' Marshal Foch declared in 1919, 'but an armistice for twenty-five years.' The cost of all this in human terms was 8.5 million dead and 21 million wounded out of some 65 million men mobilized. Although this was huge, it was not the real impact. The real impact was moral. The losses struck a blow at European self-confidence and in their belief that they consisted of superior civilizations. Matthew Yemm History Ms Bowgen ...read more.