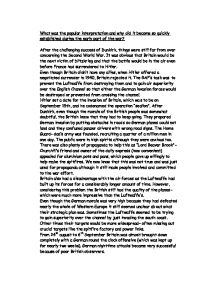 What was the popular interpretation and why did it become so quickly established during the early part of the war?

What was the popular interpretation and why did it become so quickly established during the early part of the war? After the challenging success of Dunkirk, things were still far from over concerning the Second World War. It was obvious that Britain would be the next victim of blitzkrieg and that the battle would be in the air even before France had surrendered to Hitler. Even though Britain didn't have any allies, when Hitler offered a negotiated surrender in 1940, Britain rejected it. The RAF's task was to prevent the Luftwaffe from destroying them and to gain air superiority over the English Channel so that either the German invasion forces would be destroyed or prevented from crossing the channel. Hitler set a date for the invasion of Britain, which was to be on September 15th, and he codenamed the operation "sealion". After Dunkirk, even though the morale of the British people was somewhat doubtful, the British knew that they had to keep going. They prepared German invasion by putting obstacles in roads so German planes could not land and they confused panzer drivers with wrong road signs. The Home Guard- dad's army was founded, recruiting a quarter of a million men in one day. The public were in high spirits although they were anxious too. There was also plenty of propaganda to help this as "Lord Beaver Brook"- Churchill's friend and owner of the daily express (how convenient) appealed for aluminium pots and pans, which people gave up willingly to help make the spitfires. ...read more.

I think that the reason therefore that the battle of Britain was known as "their finest hour" was because it was the last words that Churchill said in his speech. It is probably the thing that stuck in everyone's minds after the battle had finished. I think that the weaknesses in this speech are that it was made for propaganda to raise the morale of the people. Also it is very biased in the sense that he was always saying how well Britain had done and never mentioned what the Germans were going at this time unless it was a bad point. The second speech that Churchill made was called "the few". The reason that this interpretation was popular was because again it was aimed at the British public who were now actively involved in the war and what the speech was saying was basically that there was a minority in numbers in pilots but the few very brave pilots that were trying to help were working very hard. Churchill was also pointing out that the battle of Britain was very important in helping Britain to win the war. One of the most popular sentences that were said in this speech was: - "Never in the field of human conflict was so much owed by so many to so few". I think that the strengths of this interpretation are that it is very effective in reacting the audience inspiring the people. Also that it is first hand evidence because he was the prime minister at the time he is going to be able to experience and know a lot of things concerning the war. ...read more.

The strengths of these newsreels are that they were very informative and they showed the popular view of what was going on. It was also actual real footage so therefore it cannot be lying, plus there were statistics given very often. However the weaknesses were that they were very biased towards Britain they were also very simplistic and there was no real balance in what they were saying as regard to the Germans plans. I think that the newsreels at this time were giving an overall impression that the British were winning the battle of Britain and that the pilots were working so hard to win the war. Interpretation 5 is an article written for the daily express, which was edited by "lord Beaver Brook" who happened to be Churchill's close friend. The message of this article was to ask the pubic what were they doing to help with the war, if nothing why not? And then there was information telling them what they could do to help. It was published on august 13th 1940- in the stages where Germany is attacking Britain and the reason it was written was probably because it was what people wanted to hear and is mainly for propaganda, as much of everything was at this time. I think that articles like this helped to establish the popular interpretation at the time because with so much propaganda it is inevitable that people are bound to be updated in everything about the war, and therefore the myth of the few would become more and more popular and well known. ...read more.