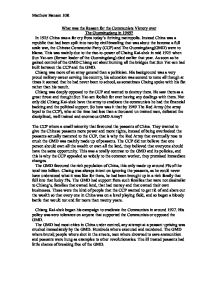 What was the Reason for the Communists Victory over The Guomingdang in 1949?

What was the Reason for the Communists Victory over The Guomingdang in 1949? In 1925 China was a far cry from today's thriving metropolis. Instead China was a republic that had been spilt into two by civil brawling that was about the become a full scale war, the Chinese Communist Party (CCP) and The Guomingdang(GMD) were to blame. This was mainly due to the rise-to-power of Chaing Kai-shek in mid 1925 when Sun Yat-sen (former leader of the Guomingdang) died earlier that year. As soon as he gained control of the GMD Chiang set about burning all the bridges that Sun Yat-sen had built between the CCP and the GMD. Chiang was more of an army general than a politician. His background was a very proud military career serving his country, his education was second to none all though at times it seemed that he had never been to school, as sometimes Chaing spoke with his fist rather than his mouth. Chiang was deeply opposed to the CCP and wanted to destroy them. He saw them as a great threat and thought Sun Yat-sen foolish for ever having any dealings with them. Not only did Chiang Kai-shek have the army to eradicate the communists he had the financial backing and the political support. So how was it that by 1949 The Red Army (the army loyal to the CCP), who at the time had less than a thousand un-trained men, defeated the disciplined, well trained and enormous GMD Army? ...read more.

The base was captured, and all The GMD had to do now was reprimand the escapees. Along the way to Shaanxi, many battles where fought, many lives were lost and October 1935, around 30,000 [according to CCP sources] Communists reached the Shaanxi base, Mao and his comrades had made it. The Long March, as it was later named, became legendary. This in itself was a huge moral victory for the communists, but along the way something more important by far had happened, something that was to stand the Communists in good stead for the coming years. Along the way the Red Army had passed through many thousands of peasant villages. Instead of ignoring the peasants, the Red Army helped them. They set up schools, showed the farmers how to work the land more efficiently, they chased land lords away and spread the word of the CCP. This was a pivotal point in the battle between the GMD and the CCP. Many of the peasants took to the ideas of the CCP, many thousands also joined the Red Army. They saw it as a way out and a way to help change China for the better. This is where the Communist uprising really began. The Red Army had began to grow and soon it would become a match for the GMD, but not quite yet. By 1937 Mao Zedong had taken full control of the CCP. ...read more.

And as the peasants made up 95% of the Chinese population his cause became more and more hopeless. Nobody would have ever thought it 24 years ago but by 1949 the Chinese Communist Party had taken full control of China with Mao at the helm. And the reason for Mao's success where clear, the CCP actually cared about the peasants and they promised change. I think that this is the main reason for the CCP's victory over the GMD. That and a whole lot of determination. Mao inspired people with his endless charm and clever theories. He never once turned his back on the peasants as he himself came form the same background as them. He had always believed that any Communist revolution must be led by the peasants, and in the end it was. Chiang Kai-shek on the other hand was a totally different person. He lied, he cheated and he murdered to get what he wanted. In the end this was his and the GMD's down fall as no successful political party can be lead by a person with such a personality. And this is why the people of China turned their backs on the GMD. China had changed dramatically since 1925, the fighting had died completely, the country had a leader they accepted, the republic had been united again and most of all China was stable. Now all that was left to be done was to rebuild China's shattered economical state. This was a job for the CCP. Matthew Hanson 10R ...read more.