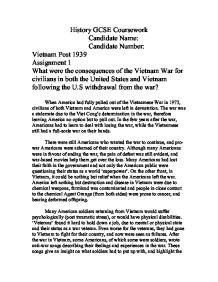 What were the consequences of the Vietnam War for civilians in both the United States and Vietnam following the U.S withdrawal from the war?

History GCSE Coursework Candidate Name: Candidate Number: Vietnam Post 1939 Assignment 1 What were the consequences of the Vietnam War for civilians in both the United States and Vietnam following the U.S withdrawal from the war? When America had fully pulled out of the Vietnamese War in 1973, civilians of both Vietnam and America were left in devastation. The war was a stalemate due to the Viet Cong's determination in the war, therefore leaving America no option but to pull out. In the few years after the war, Americans had to learn to deal with losing the war, while the Vietnamese still had a full-scale war on their hands. There were still Americans who wanted the war to continue, and pro-war Americans were ashamed of their country. Although many Americans were in favour of ending the war, the pain of defeat was still evident, and war-based movies help them get over the loss. ...read more.

Assignment 1 What were the consequences of the Vietnam War for civilians in both the United States and Vietnam following the U.S withdrawal from the war? lies being fed to them by the U.S government. On the other hand, to this the North Vietnamese citizens would have been delighted that America had pulled out, yet devastated in the condition their country was left in. Anti-communist South Vietnamese citizens would have mixed emotions about America's withdrawal from the war. Some would be upset about the condition of the land and happy with the so-called ally's withdrawal. Others would feel that due to the withdrawal, the communist takeover would be imminent, and wish the Americans hadn't withdrew. After the war, America went through a long-term guilt trip, were they made movies about the war. These movies were made to numb the guilt, and are anti-war as the conduct of America in the war is morally seen as wrong. ...read more.

They left Vietnam for Hong Kong, Thailand and Malaysia, although Malaysia rejected them. Overall the consequences of the Vietnam War for civilians in Vietnam meant either disease, starvation or worse poverty than before. America had gone in, although dubiously, to make conditions better and had ultimately failed, and unlike many Vietnamese they didn't have to suffer them consequences. In America, it was a different type of sadness. Many Americans regretted their country's conduct, and the humiliation of losing to such a small nation. It took five presidents over two decades to end the war. All of them promised to end the war, so the American public were feeling bitterly let down by their country's government. To this day, both sides are still recovering from the war in one way or another, and recently the U.S have lifted their trade embargo on Vietnam in 1993, and re-established full diplomatic relations, more than twenty years after the war had ended. ...read more.