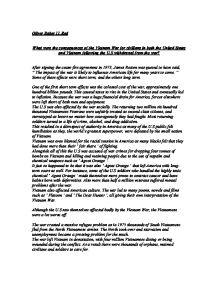 What were the consequences of the Vietnam War for civilians in both the United States and Vietnam following the U.S withdrawal from the war?

Oliver Baker 11,Red What were the consequences of the Vietnam War for civilians in both the United States and Vietnam following the U.S withdrawal from the war? After signing the cease-fire agreement in 1973, James Reston was quoted to have said, " The impact of the war is likely to influence American life for many years to come. " Some of these effects were short term, and the others long term. One of the first short term effects was the colossal cost of the war, approximately one hundred billion pounds. This caused taxes to rise in the United States and eventually led to inflation. Because the war was a huge financial drain for America, forces elsewhere were left short of both men and equipment. ...read more.

It just so happened to be that it was also ' Agent Orange ' that left America with long-term scars as well. For instance, some of the U.S soldiers who handled the highly toxic chemical ' Agent Orange ' made themselves more prone to contract cancer and have babies born with deformities. Also more than half a million veterans suffered mental problems after the war. Vietnam also affected American culture. The war led to many poems, novels and films such as ' Platoon ' and ' The Dear Hunter ', all giving their own interpretation of the Vietnam War. Although the U.S saw themselves affected badly by the Vietnam War, the Vietnamese were a lot worse off. ...read more.

Things got worse when in 1978 Vietnam went to war with China and Cambodia. Roughly one million refugees were uprooted, already suffering from starvation and sick of the repressive regime forced upon them, they decided to emigrate illegally by boat. The despair of these people captured the world, and the event was soon labelled the flight of the boat people. Approximately fifty thousand people drowned or were murdered. However, nearly a million were accepted in the west, most in the United States of America. Both the nations of Vietnam and America were undoubtedly affected by the war in Vietnam. Both suffered heavy casualties and scars that lasted long into the future. However, Vietnam was not only affected socially but its country was left in ruins leaving me to conclude that Vietnam was the worst affected by The Vietnam War. ...read more.