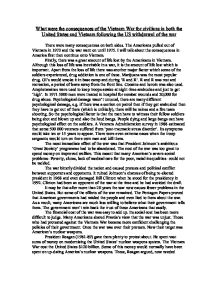 What were the consequences of the Vietnam War for civilians in both the United States and Vietnam following the US withdrawal of the war There were many consequences on both sides. The Americans pulled out of Vietnam in 1973 and the war went on until 1975. I will talk about the consequences in America first then continue onto Vietnam. Firstly, there was a great amount of life lost by the Americans in Vietnam. Although this loss of life was inevitable in a war, it is the amount of life lost which is important. Apart from the loss of life there was another major factor which some of the soldiers experienced, drug addiction is one of these. Marijuana was the most popular drug. GI's would smoke it in base camp and during 'R and R'. R and R was rest and recreation, a period of leave away from the front line. Cocaine and heroin was also used. Amphetamines were used to keep troops awake at night-time ambushes and just to get 'high'. In 1971 5000 men were treated in hospital for combat wounds and 20,000 for drug abuse. Psychological damage wasn't unusual, there are many different psychological damage, e.g. if there was a section on patrol then if they get ambushed then they have to get out of there (which is unlikely), there will be mines and a fire team shooting. ...read more.

The United States Army enthusiastically co-operated with the film's director and star- John Wayne. The army also had control over the script. The film made a respectable profit but it was laughed at by the film critics. It was really western. Wayne and his Special Forces team were the cowboys and the brutal, murdering Vietcong were the Red Indians. John Wayne's enthusiasm for playing the war hero was, perhaps, intended to make up for the fact that he managed to avoid serving in the united states army during the WW2 between 1941 and 1945. The films which came after the war were very different. Films like Platoon (1986), full metal jacket (1987), and Hamburger Hill (1987) left out the sentimental heroics of the green berets to give a more honest bloody view of the war. Oliver Stone, the director of platoon, fought in the war. In 1976 he wrote a script for the film but none of the major Hollywood film studios would agree to make it. Stone's view of the war was too bleak and depressing. It wasn't until 1986 that he found the money to begin work on the film. The US army, though, refused to offer help in the making it. ...read more.

Vietnam is struggling still to rebuild its economy. Up until 1989 Vietnam relied very heavily on aid and assistance from the USSR. Its economy was a Soviet-style communist economy with agriculture and industry owned and run centrally by the government. With the collapse of the USSR, the subsequent ending of Soviet aid and the continuing poor performance of the Vietnamese leaders decided to make major reforms to the economic system. The US policy of isolating Vietnam financially and the cost of the Vietnamese troops in Cambodia added to the economic crisis. In 1986, the Communist Party announced widespread reforms which echoed changed in communist-run economics across the globe. This policy, called Doi Moi or 'Renovation', moved away from the traditional reliance on central planning, fixed quotas and collectivised agriculture towards a free market approach encouraging profit-making and production incentives. It has moved towards what the Chinese have called 'Free market socialism'. In he political sphere, the Communist Party remains firmly in control. Small signs of improvement in the Vietnamese economy emerged in the late 1980s. In 1988, many foreign companies were expressing an interest in doing business in Vietnam. Samsung television sets were already being made in Ho Chi Minh City and a British company was assembling aluminium windows in Vang Tau. ...read more.