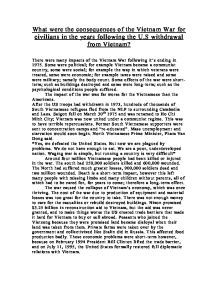 What were the consequences of the Vietnam War for civilians in the years following the U.S withdrawal from Vietnam?

What were the consequences of the Vietnam War for civilians in the years following the U.S withdrawal from Vietnam? There were many impacts of the Vietnam War following it's ending in 1975. Some were political; for example Vietnam became a communist country, some were social; for example the way in which veterans were treated, some were economic; for example taxes were raised and some were military; namely the body count. Some effects of the war were short-term; such as buildings destroyed and some were long-term; such as the psychological conditions people suffered. The impact of the war was far worse for the Vietnamese than the Americans. After the US troops had withdrawn in 1973, hundreds of thousands of South Vietnamese refugees fled from the NLF to surrounding Cambodia and Laos. Saigon fell on March 30th 1975 and was renamed to Ho Chi Minh City; Vietnam was now united under a communist regime. ...read more.

This affected food production badly. These economic problems were short-term however, because on February 1994 President Bill Clinton lifted the trade barrier, and on July 11, 1995, the United States formally restored full diplomatic relations with Vietnam. Vietnam's environment was badly damaged by the American use of high explosive bombs, napalm, chemical weapons, mortar shells and artillery. B-52 bombers left behind huge craters, which today are full of water and even fish. Shot down planes, empty artillery shell casings, and disused weapons litter the ground where battlefields once were. Napalm and Agent Orange destroyed a fifth of Vietnam's forests and farmlands and also due to the spraying of Agent Orange, many people were made more likely to contract cancer and have children born with deformities. These are other long-term effects. There were lots of bad consequences for the US as well, although America was able to recover quickly. Politically, the only effect America had to deal with was the embarrassment of their superpower being defeated by a smaller, under developed country. ...read more.

Racial tension was building in America after the war. African Americans felt cheated because they fought for America when America would not give them equal rights, and the Southern states still harbored racists like the KKK. Finally, the Vietnam War caused the making of several films about it. Some of them showed the bad aspects of it, like the climate, the ambushes and the atrocities. Platoon is such a film, which was directed by Oliver Stone who fought in Vietnam himself. But there are other films such as Rambo, which glorified the war and tried to convey the idea of American Victories and made a futile effort to restore America's pride over the war. The most important impacts of the war are the long-term effects suffered by Vietnam. Mainly the children born with deformities. They will have to live their whole lives suffering the consequences of the war when they weren't even born while it was happening. America recovered easily from the impacts it faced, and there are no real long-term effects that carry on today, except for a deep down feeling of guilt. ...read more.