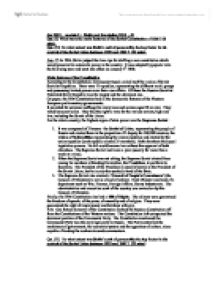 What were the main features of the Soviet Constitution of 1936 ?

Jan 2002 - module 3 : Stalin and Revolution 1924 - 41 Qst. (1) What were the main features of the Soviet Constitution of 1936 ? (8 mks). Qst. (11) To what extent was Stalin`s cult of personality the key factor in his control of the Soviet Union between 1929 and 1941 ? (22 mks). Ans. (1) In 1936, Stalin judged the time ripe for drafting a new constitution which would preserve his autocratic power in the country. It was adopted by popular vote the following year and went into effect on January 1st 1938. Main features of the Constitution According to the Constitution, Communist Russia called itself the Union of Soviet Socialist Republics. There were 11 republics, representing the different racial groups and possessing limited powers over their own affairs. Of these the Russian Socialist Federated Soviet Republic was the largest and the dominant one. On paper, the 1936 Constitution had all the democratic features of the Western European parliamentary governments. It provided for universal suffrage for every man and woman aged 18 or over. They voted by secret ballot. They had the right to vote for the various soviets, high and low, including the Soviet of the Union. For the whole country, the highest organ of state power was the Supreme Soviet : 1. ...read more.

His skilful use of youth organisations eg Morozov and education, the media and the arts and popular culture made him a star throughout the whole country. The 1930s saw a drastic reduction in creative freedom. This was in line with a general suspicion by the state of all independent lines of thought. Creativity had to serve the immediate needs of the government - 'Partiinost' (Party Spirit). Socialist Realism replaced the abstract experimental work of the 1920s with stereotypical art forms designed to convey immediately obvious pro-Soviet messages. Under Stalin there was some growth in popular culture. By 1940 Russia had 28,000 cinemas and stadiums were built in all the bigger towns as were parks such as Gorky Park. Books became very popular, but all the art was 'Social Realism' (whilst all archictecture was 'Stalinist Gothic' ). In order to further elevate his status the Stalin regime used art, posters and the media. Artists were forced to create works which glorified Russian achievement - 'Social Realism' art, lots of red and tractors and Stalin in the sky. Artists painted pictures glorifying Stalin and considerable effort was employed to create striking and inspiring posters and sculptures which represented Soviet Society as happy and engaged in constructive and exciting industrial work. ...read more.

the personality cult of leaders, of infallible heroes. This is dangerous and detrimental. The theory of 'heroes' and the 'crowd' is not a Bolshevik, but a Social-Revolutionary (ie. Anarchist) theory. I suggest we burn this book'. (J.V. Stalin. 'Works' Vol 13, 1955). Such facts would indicate that the 'cult of personality' around Stalin was not built up by Stalin - but by revisionists and concealed revisionists like Karl Radek (1885-1939) and Nikita Kruschev and was probably against Stalin`s wishes. The German writer Lion Feuchtwanger (1884-1958) in 1936 confirms that Stalin suspected that the 'cult of personality' was being fostered by 'wreckers' with the aim of discrediting him. 'It is manifestly irksome to Stalin to be worshipped as he is, and from time to time he makes fun of it. Of all the men I know who have power, Stalin is the most unpretentious. I spoke frankly to him about the vulgar and excessive cult made of him, and he replied with equal candour. He thinks it is impossible even that 'wreckers' may be behind it in an attempt to discredit him'. (Feuchtwanger. Moscow 1937). Hence we need to be cautious in concluding that Stalin`s cult of personality was the key factor in his control of the Soviet Union between 1929-41 - particularly in light of evidence which appears to contradict the stereotyped view portraying Stalin as an egoistic dictator and which rather reveals the leader as a modest and self-effacing individual. D.McCready 20.04.03 ...read more.