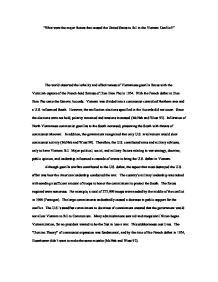 &quot;What were the major factors that caused the United States to fail in the Vietnam Conflict?&quot;

"What were the major factors that caused the United States to fail in the Vietnam Conflict?" The world observed the lethality and effectiveness of Vietnamese guerilla forces with the Vietminh capture of the French-held fortress of Dien Bien Phu in 1954. With the French defeat at Dien Bien Phu came the Geneva Accords. Vietnam was divided into a communist-controlled Northern area and a U.S.-influenced South. However, the unification elections specified in the Accords did not occur. Since the elections were not held, polarity remained and tensions increased (McNab and Wiest 93). Infiltration of North Vietnamese communist guerillas to the South increased, presenting the South with threats of communist takeover. In addition, the government recognized that only U.S. involvement would slow communist activity (McNab and Wiest 90). Therefore, the U.S. contributed arms and military advisers, only to have Vietnam fall. Major political, social, and military factors relating to war strategy, doctrine, public opinion, and leadership influenced a cascade of events to bring the U.S. defeat in Vietnam. Although guerilla warfare contributed to the U.S. defeat, the aspect that most destroyed the U.S. effort was how the American leadership conducted the war. ...read more.

The famous search-and-destroy missions were meant to solely eliminate communists from the Southern population (Kolko 102). Since the U.S. did not hold territory but operated from central bases, the VC and NVA were allowed to return to their areas. The centralized Americans were easy prey for the versatile enemy. Also, the fact that the U.S. did not hold ground made pacification of the population, which involved removing VC and preventing infiltration, difficult. The U.S. did inflict heavy casualties on the VC and NVA. However, the North did not surrender, for the casualties did not have the psychological effect that the Americans presumed they would. In addition, the ability of U.S. forces to inflict losses was greatly restrained by the enemy's ability to retreat to Cambodia and Laos (Thompson and Frizzell 42). The American leadership was reluctant to enter those countries for fear of a high-intensity conflict. In addition, VC infiltration increased in 1965, further compounding the problem (Pentagon). Some historians argue that it was not the government's inappropriate decisions that lost Vietnam, but rather the public's lack of support and trust for the conflict. The basis of this viewpoint is that if the public would have had greater support for the government, the war could have ended differently. ...read more.

In fact, the large commitment of U.S. forces was necessary to halt the South's losing trend at the end of 1965 (Pentagon). In the end, however, the South was not able to hold and Saigon fell. The United States failed to achieve its objectives in Vietnam. Political, military, and social problems plagued the United States during its involvement in Vietnam. Politically, the South did not have sufficient influence over its people to ensure population security and to keep communists out of the Southern population (Hunt and Schultz 87). Militarily, the U.S. did not have an appropriate strategy to counter guerilla warfare, as seen when the Americans fought a war of attrition. Socially, public support was low at home. In summary, the entity most at fault for losing in Vietnam is the United States government, for public support does not have a significant effect on government policy. The U.S. leadership was too greatly affected by dissenting public opinion. Because of fear that escalation would cause public outrage, the military waged limited war, an inappropriate strategy to counter guerilla warfare. An apocryphal quote from the Continental Congress states "a leader owes his people his judgment." In Vietnam, many failures in leadership occurred. The government failed to fully utilize its judgment, thus losing the war in Vietnam. ...read more.