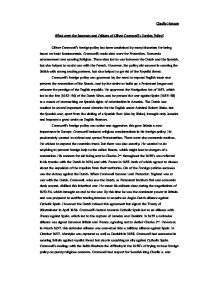 What were the Successes and Failures of Oliver Cromwell's Foreign Policy?

Charlie Hanson What were the Successes and Failures of Oliver Cromwell's Foreign Policy? Oliver Cromwell's foreign policy has been scrutinised by many historians for being based on basic fundamentals. Cromwell's main aims were for Protection, Economic advancement and securing Religion. These aims led to war between the Dutch and the Spanish, but also helped to avoid war with the French. However, the policy did succeed in securing the British with strong trading partners, but also helped to get rid of the Royalist threat. Cromwell's foreign policy was governed by the need to expand English trade and prevent the restoration of the Stuarts, and by the desire to build up a Protestant league and enhance the prestige of the English republic. He approved the Navigation Act of 1651, which led to the first (1652-54) of the Dutch Wars, and he pressed the war against Spain (1655-58) as a means of encroaching on Spanish rights of colonization in America. ...read more.

In 1655 a defensive alliance was signed between Britain and France, agreeing not to shelter Charles 2nd. However, in March 1657, this defensive alliance was converted into a military alliance against Spain. In October 1657, Mardyke was captured as well as Dunkirk in 1658. Cromwell had succeeded in securing Britain against royalist threat but also in acquiring an ally against Catholic Spain. Cromwell's dealings with the Baltic illustrate the difficulty in the 1650's of trying to base foreign policy on purely religious concerns. Cromwell had respect for Swedish king Charlie x, and hoped that their two countries might form some kind of protestant union. This would allow Britain entr�e directly into Baltic diplomacy. The growing importance, commercially of the Baltic powers with their navies made it imperative, that a major trading nation like Britain should have a direct say in such affairs. Neither the Protector of the Swedish king was happy with Dutch dominance in this area, which had created a disproportionate commercial advantage. ...read more.

Cromwell's ideologically motivated attitudes towards Spain had sacrificed British economic interests, and the French alliance of 1657, the capture of Dunkirk the following year and the glorious exploits of the navy could only conceal this fact. The Spanish war led to a loss of British trade to the Dutch, who benefited from their neutrality, and reduced the power of an already declining pain in Europe, and built up that of an emerging France, which would soon prove to be a serious political and economic rival of Britain. Cromwell's foreign policy depended on the balance between three factors. The short term external greatness which it certainly brought to Britain; the longer term implications which it had for British interests by encouraging the rise of France and the Dutch at the expense of an already declining Spain; and the internal cost to the regime in merchant discontent and financial troubles. These financial troubles which were mainly caused by the expensive foreign policy of the 1650's, this and the popular discontent with high taxation is perhaps one of the major reasons for the bring about of the restoration. ...read more.