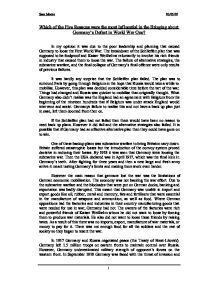 Which of the Five Reasons were the most Influential in the Bringing about Germany's Defeat in World War One?

Which of the Five Reasons were the most Influential in the Bringing about Germany's Defeat in World War One? In my opinion it was due to the poor leadership and planning that caused Germany to loose the First World War. The breakdown of the Schlieffen plan that was supposed to be foolproof and Kaiser Weilhelms reluctantly to involve his rich friends in industry that caused them to loose the war. The failure of alternative strategies, the submarine warfare, and the final collapse of Germany's final offence were only results of previous failures. It was hardly any surprise that the Schlieffen plan failed. The plan was to surround Paris by going through Belgium in the hope that Russia would take a while to mobilise. ...read more.

By 1918 it was seen that Germany were loosing the submarine war. Then the USA declared was in April 1917, which was the final kick in Germany's teeth. After fighting for three years and then a new large and fresh army arrive it meant testing Germany's limits and making them work even harder. However the main reason that germane lost the war was the limitations of German economic mobilisation. The economy was not backing the war effort. Due to the submarine warfare and the blockades that were put on German docks, banking and exportation was badly disrupted. This meant that Germany was unable in import and export goods like oil, rubber, metal and mercury, fats and fertilisers that were essential in the manufacture of weapons and ammunition, as well as food. ...read more.

The collapse of Germany's final Offensive was inevitable from the start. In conclusion, the most influential reason in bringing about Germanys defeat was the limitations of German economic mobilisation. Despite the other factors that went wrong for Germany, with more equipment and preparation from the economy, they would have definitely have had better chances. The next factor is the failure of the Schlieffen plan and entry of the USA. Better tactics and less "interference" from other countries would have resulted in more success. However with more preparation from the economy they may have able to cope with these set backs. The collapse of Germany's final offensive probably comes next because it was the factor that actual ended the war. The finally the failure of alternatives strategies because had the first plans worked there would be no need for other strategies. Hence they would not have failed. Sara Moore 02/05/07 1 ...read more.