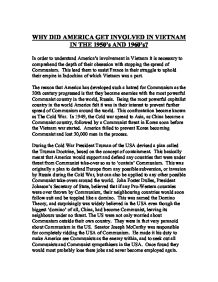 WHY DID AMERICA GET INVOLVED IN VIETNAM IN THE 1950's AND 1960's? In order to understand America's involvement in Vietnam it is necessary to comprehend the depth of their obsession with stopping the spread of Communism. This lead them to assist France in their struggle to uphold their empire in Indochina of which Vietnam was a part. The reason that America has developed such a hatred for Communism as the 20th century progressed is that they became enemies with the most powerful Communist country in the world, Russia. Being the most powerful capitalist country in the world America felt it was in their interest to prevent further spread of Communism around the world. This confrontation became known as The Cold War. In 1949, the Cold war spread to Asia, as China became a Communist country, followed by a Communist threat in Korea soon before the Vietnam war started. America failed to prevent Korea becoming Communist and lost 30,000 men in the process. ...read more.

Senator Joseph McCarthy was responsible for completely ridding the USA of Communism. He made it his duty to make America see Communists as the enemy within, and to seek out all Communists and Communist sympathisers in the USA. Once found they would most probably lose there jobs and never become employed again. Prior to the Vietnam War, part of the French empire, Indochina, had become unstable due to Nationalist forces fighting for independence for the French colonies, Vietnam, Cambodia and Laos. The US government found it necessary to support France and its empire so that it remained one of the most influential capitalist countries in Europe. They had also already invested hundreds of millions of dollars in supporting France so they felt they should carry out what they had already started. Unfortunately for the USA, the Nationalist forces, The Viet Minh (a Communist dominated movement), led by Ho Chi Minh, succeeded in their battle for independence and the Geneva Conferences were held in 1954 to decide what would happen to Vietnam. ...read more.

They gradually increased their forces by way of what was later called the Ho Chi Minh trail until in 1964 they had over 100,000 Vietcong guerrillas in the South. Meanwhile US assistance to the South was increasing. Later that year there was an attack on the US destroyer, the Maddox, in the Gulf of Ton Kin, by the North Vietnamese. Partly because President Johnson felt the need to take tough action due to the forthcoming Presidential election, this triggered direct American military involvement. Johnson asked for a resolution expressing US determination to support freedom and protect peace in Southeast Asia. Congress responded with the Ton kin Gulf Resolution, expressing support for "all necessary measures" the President might take to repel armed attacks against US forces and prevent further aggression. In addition it was becoming clear that without direct US military involvement the South Vietnam government would be incapable of defeating the Vietcong. To summarise, America's determination to contain Communism and its linked support for France and Indochina, led to their involvement in Vietnam, which gradually escalated to a full scale war. Daniel Allan 11GS ...read more.