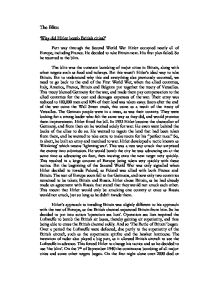 Why did hitler bomb british cities?

The Blitz: 'Why did Hitler bomb British cities?' Part way through the Second World War Hitler occupied nearly all of Europe, including France. He decided to take Britain next. His first plan failed. So he resorted to the blitz. The blitz was the constant bombing of major cities in Britain, along with other targets such as food and railways. But this wasn't Hitler's ideal way to take Britain. But to understand why this and everything else previously occurred, we need to go back to the end of the First World War, when the allied countries, Italy, America, France, Britain and Belgium put together the treaty of Versailles. This treaty blamed Germany for the war, and made them pay compensation to the allied countries for the cost and damages expenses of the war. Their army was reduced to 100,000 men and 10% of their land was taken away. Soon after the end of the war came the Wall Street crash, this came as a result of the treaty of Versailles. The German people were in a mess, as was their country. They were looking for a strong leader who felt the same way as they did, and would promise them improvement. Hitler fitted the bill. In 1933 Hitler became the chancellor of Germany, and from then on he worked solely for war. He even went behind the backs of the allies to do so. He wanted to regain the land that had been taken from them, and he wanted to take extra to make room for his "perfect race." So, in short, he built an army and marched to war. Hitler developed a tactic known as 'Blitzkrieg' which means 'lightning war'. This was a two way attack that surprised the enemy into submission. He would bomb the city he was advancing on at the same time as advancing on foot, then moving onto the next target very quickly. ...read more.

There were few complaints and by the end of 1940, over 1 million had signed up. However, not all men were called upon, these men were required back at Britain to do essential jobs such as mining, electronics, medicine, etc. The government worked very closely with the trade unions to ensure that as many products could be made to aid the war effort as possible, also controlling prices and wages. The government kept a close eye on the production in the mining industry, and when mining production did drop in 1940, many men were recalled from the armed forces to return to mining. After 1942, when Britain felt the war was going well in their favour and that were going to win, men were given the choice to be miners instead of being in the army, but few took up the offer. To maintain the rate of production, people had to work very long hours. An 80 hour week was not uncommon. As a result, a few strikes broke out, but were dealt with quickly and the news on them was heavily censored. The 'home guard' was also introduced, along with the air raid wardens, allowing every man and woman, old or disabled, it didn't matter, to aid in the war effort. The air raid wardens played a vital role during the war, and had many jobs. In every city, the air raid wardens had a little hut in their area with a telephone, meaning they had a very good communications system. The wardens were generally people who new the area well, and the people who lived there, meaning they could deal with problems effectively. They had the job of calling out the first warning of an upcoming air raid, manning sirens or whistles and giving detail on what type of attack to expect. (e.g. gas) they also gave the all clear when that raid was over for people to come out of their shelters with a rattle. ...read more.

To add to the news reports were reminders of drills and adverts for things like the home guard, air raid wardens, and women to work in factories, etc. Clips from propaganda films were played over the radio, including things like, 'Britain is a prepared nation', 'don't panic', 'secure all lights in your house', and along the lines of evacuation 'here in the country, your children are safe and happy' and 'transport may change'. Other reminders were also sent over the radio such as 'have your gas mask with you always', 'don't use you phone for long' and 'carry your identity label with you always'. This meant that the radio had become a vital part of British propaganda, as almost every single British person had access to it. The perfect way to feed the country lies. To conclude, the British government hid the truth from the nation very effectively. They managed to withhold all the crushing news that would surely have posed major problems had it got out and they managed to place counter propaganda over the things that did get out, or were let out. They did this through several methods. But first they had to legalise it, so they passed two separate acts, the 'emergency powers act', and the defence of the realm act'. These acts set the foundations of all the concealed truth that was to follow. First of all they sent out propaganda films to get the public in the right frame of mind and covered their backs by saying 'don't listen to rumours', and then they began to censor the media, first in radio and newspapers, then onto things such as posters. By the time the blitz began, they had already set up the ministries, of which the ministry of information controlled the media. They now had complete control over the British civilians knowledge of what was going on in the war. And they used it to their full advantage. And that is how the British government successfully hid the truth. By Charles Medlock ...read more.