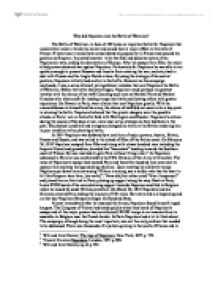 Why did Napoleon lose the Battle of Waterloo?

Why did Napoleon lose the Battle of Waterloo? The Battle of Waterloo, in June of 1815,was an important battle for Napoleon that would either make or break his career and would have a major affect on the state of France. If victorious it would have consolidated his popularity in France and secured his position as Emperor. It proved however to be the final and decisive action of the Napoleonic wars, ending his domination of Europe. After his escape from Elba, the major allied powers declared war against Napoleon. Fortunately for Napoleon he was able to act quickly enough to prevent Russian and Austria from entering the war, and only had to deal with Prussia and the Anglo-Dutch armies. By using the strategy of the central position, Napoleon initially had control in the battle. However as the campaign continued, it was a series of small yet significant mistakes that cost Napoleon the Battle of Waterloo. Before the battle had even begun, Napoleon made perhaps his greatest mistake with the choice of his staff. Choosing such men as Marshal Ney and Marshal Grouchy who where unfit for leading troops into battle and leaving others with greater experience like Davout in Paris, was a choice that cost Napoleon greatly. With the overconfidence in himself and his army, the choice of staff did not seem to be a key point in winning the battle. Napoleon believed that the greater dangers were the possible attacks on Paris,1 not on the battle field with Wellington and Blucher. Napoleon's actions during the course of the days at war, were also not as strategic as they had been in the past. His physical condition and arrogance changed his view on the battles rendering him in poor condition to be planning a battle. In 1814 Napoleon was defeated by a coalition of major powers, Austria, Britain, Prussia and Russia, and was exiled to the island of Elba off the Italian coast. ...read more.

Napoleon sent out troops to identify the unknown force, providing Blucher with enough time to reform his line. After nearly six hours of slaughter, Napoleon sent in Grouchy's cavalry and his Old Guard to attack the Prussian centre, which easily gave away leaving twelve thousand dead or wounded. It was twilight and the rain started to fall. Napoleon won the Battle at Ligny but was not able to destroy the main body of Blucher's army. 70 000 Prussians retreated North to Wavre where they were able to regroup. Without the aid of reinforcement troops, the Ligny Battle took up a large amount of Napoleon's resources. If Wellington had been able to reach Ligny at the end of the battle he would have crushed the French army and there would have been no Waterloo. At Quatre-Bras, Ney fearing Wellington's much larger force, sent a cavalry detachment ahead to inspect the situation. They reported that the town was free of enemy so Ney sent in 3000 men to capture the town. Upon encountering a small section of the British army, Ney turned back to Gosselies expecting the rest of the Anglo-Dutch army to be hidden behind building, in the forest or in fields. In Gosselies he waited for further instructions. By delaying his attack on the Anglo-Dutch position by several hours, Wellington had time to reinforce Quatre-Bras with cavalry and infantry. When Ney finally attacked at 2pm the French army was sharply repulsed. Napoleon did not know this because communications had fallen apart in Soult's hands, and sent the message of help. Being severely handicapped by the absence of Drouet (who returned two hours after the battle had ended), Ney lost 4300 troops. If Drouet had had enough military sense to realize that obeying Ney's orders would waste valuable time, he would have had stayed at Ligny. By assisting Napoleon in wiping out Prussia, it would have prevented them from being able to regroup, solidifying Napoleon's victory at Mont-Saint-Jean. ...read more.

He also placed troops in Paris and in other areas of the country as a safety precaution. The troops and Davout would have been put to better use at the Battle of Waterloo with the real danger. Towards the end of the Battle, Napoleon was not physically well. This may have contributed to his downfall. He lived in high tension and in the last few years was solacing his sorrows with food. At Waterloo his doctors implored him to take rest and exercise but he refused their advice. Everyday he would spend hours on horseback while suffering from haemorrhoids, and kidney stones as well as dysuria. It is also possible that the cancer that would eventually kill him had already began to produce negative side affects. The Battle of Waterloo had not been a success for Napoleon, but once again Europe felt that it was safe from his tyrannical power. On June 22, Napoleon signed his second abdication and was exiled to Saint Helena. The Hundred days was over and on June 28, Louis XVIII returned to the throne. The outcome of this part of history could have been very different if Napoleon had realized the full potential of his enemies. If he had thought that the battle was to be a great challenge he probably would have hired different marshals with more qualifications and brought more troops with him to Belgium. Also if Napoleon had given more independence to his marshals they would have been able to analyse the battle without constantly having to communicate with Napoleon and could have drawn their own conclusions and plans of action. This small element could have won Napoleon the campaign on June 16 or stopped the entry of Prussia into the final battle. Time also played a factor in Napoleon's loss of the battle. Napoleon, like all other leaders was merely in power until he reached a downfall and it was taken by someone else. On June 18, 1815 "Napoleon met his Waterloo",14 bring fifteen years military dictatorship to an end. ...read more.