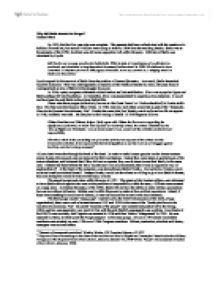 Why did Stalin launch the Purges?

Why did Stalin launch the Purges? Richard Ward By 1932, the first five year plan was complete. The peasants had been collectivised with the creation of a kolkhoz for each mir, but around 7 million were dying or dead by 1934 from the resulting famine. Stalin was at the pinnacle of the CPSU, but there was still some opposition left within the party. Criticism of Stalin was circulated by Ryutin MN Ryutin was a young, unorthodox Bukharinite. Witht he help of a small group of co-thinkers he produced, and circulated, a long theoretical document ('rediscovered' in 1989, it is believed to have contained 13 chapters and run to 200 pages). It included, not to say centred on, a stinging attack on Stalin and his policies.1 Ryutin argued for the removal of Stalin from the position of General Secretary. As a result, Stalin demanded Ryutin's execution. This was voted against by a majority of the Politburo headed by Kirov, the party boss of Leningrad and an ally of Stalin in the struggle for power. ...read more.

At the head of the conspiracy was (according to Stalin) Trotsky. Conveniently, Trotsky was in exile and unable to defend himself. Perhaps Trotsky would not have been so willing to give in to Stalin's threats; thus convicting him would be insult to the injury of exile. The second purge took place within the army in 1937. The cream of the Russian military were skimmed to leave Stalin able to appoint new men to the positions of responsibility within the army. Officers were arrested on a large scale. As General Secretary of the CPSU, Stalin did not have the ability to make military promotions but was not without influence. Neither was it within his power to make ad hoc political executions. Indeed, if there was something he could not do directly, it was not beyond him to see it was done indirectly. The third purge was the 'mass purge'. Carried out by the NKVD (forerunner of the KGB, a huge organisation), there was a rush of arrests between 1937 and 1938 in the name of the 'Trotskyite-Zinovievite Counter-Revolutionary Plot'. ...read more.

Supporters of Stalin supported him, and those that did not were filled with a greater mistrust. From 'The Great Terror - A Reassessment': Most students of the USSR agree that the so-called Ryutin platform was the 'crucial' event leading to Stalin's generalisation, his systematisation, of terror.3 This was the point at which the plans behind the purges were conceived. Reminded of Lenin's Last Testament, he was prompted to make stronger his grip on power. The Purges were the stone that killed several proverbial birds, namely revenge upon his rivals, securing his position at the top of the CPSU (by creating a new layer at the top of the CPSU and army), and reinforcing public belief in the conspiracy to destroy Communism in Russia which gave reason enough to continue what he had begun. 1 "Genesis of bureaucratic socialism" Weekly Worker 178 Thursday February 12 1997 2 "Report of Court Proceedings in the Case of the Anti-Soviet 'Bloc of Rights and Trotskyites' heard before the Military Collegium of the Supreme Court of the U.S.S.R., Moscow, March 2-13, 1938" (Publ. People's Commissariat of Justice of the U.S.S.R., Moscow, 1938) 3 "The Great Terror - A Reassessment" by R Conquest, London 1990, p24 ...read more.