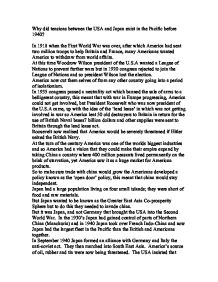 Why did tensions between the USA and Japan exist in the Pacific before 1940?

Why did tensions between the USA and Japan exist in the Pacific before 1940? In 1918 when the First World War was over, after which America had sent two million troops to help Britain and France, many Americans wanted America to withdraw from world affairs. At this time Woodrow Wilson president of the U.S.A wanted a League of Nations to prevent further wars but in 1920 congress rejected to join the League of Nations and so president Wilson lost the election. America now cut them selves of from any other country going into a period of isolationism. In 1935 congress passed a neutrality act which banned the sale of arms to a belligerent country, this meant that with war in Europe progressing, America could not get involved, ...read more.

So to make sure trade with china would grow the Americans developed a policy known as the 'open door' policy, this meant that china would stay independent. Japan had a large population living on four small islands; they were short of food and raw materials. But Japan wanted to be known as the Greater East Asia Co-prosperity Sphere but to do this they needed to invade china. But it was Japan, and not Germany that brought the USA into the Second World War. In the 1930's Japan had gained control of parts of Northern China (Manchuria) and in 1940 Japan took over French Indo-China and now Japan had the largest fleet in the Pacific than the British and Americans together. ...read more.

Japan had remained neutral during the European war but now joined the side of the Germans. In July 1941 Roosevelt announced a total ban on U.S trade with Japan, this jeopardised her oil supplies. General Tojo demanded that the USA give Japan a free hand in Asia, so negotiations between the two countries continued throughout the autumn of 1941. Whilst the two sides talked a Japanese carrier force left islands of north Japan and was heading for Pearl Harbour. On the 26th of November 1941, Tojo broke of negotiations with the USA a clear signal for war, but a delay in decoding the message in Washington meant that Togo's message was only six hours before the attack was launched on the morning of 7th December 1941 - 'a day that will live in infamy' as Roosevelt called it. ...read more.