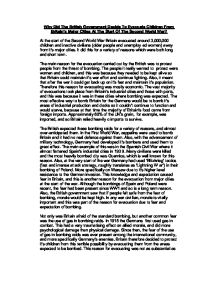 Why Did The British Government Decide To Evacuate Children From Britain's Major Cities At The Start Of The Second World War?

Why Did The British Government Decide To Evacuate Children From Britain's Major Cities At The Start Of The Second World War? At the start of the Second World War Britain evacuated around 3,000,000 children and inactive civilians (older people and unemployed women) away from it's major cities. It did this for a variety of reasons which were both long and short term. The main reason for the evacuation carried out by the British was to protect people from the threat of bombing. The people it really wanted to protect were women and children, and this was because they needed to be kept alive so that Britain could maintain it's war effort and continue fighting. Also, it meant that after the war it could get back up on it's feet and maintain it's population. Therefore this reason for evacuating was mostly economic. The vast majority of evacuations took place from Britain's industrial cities and those with ports, and this was because it was in these cities where bombing was expected. The most effective way to bomb Britain for the Germans would be to bomb it's areas of industrial production and docks so it couldn't continue to function and would starve, because at that time the majority of Britain's food came from foreign imports. ...read more.

Although the bombings of Spain and Poland were recent, the fear had been present since WW1 and so is a long term reason. Also, the British government saw that if people felt safe from the fear of bombing, morale would be kept high. In any war civilian, morale is vitally important and this was part of the reason for evacuation due to fear and expectation of bombing. Not only was Britain afraid of the standard bombing, but another common fear was the use of gas in bombing raids. In 1915 the Germans first used gas in combat. This had a very traumatising effect on allied morale, and did more psychological damage than physical damage. Since then, the fear of the use of gas in bombing raids was ever present among the international community, and more specifically Germany's enemies. Britain therefore decided to protect it's children from this terrible possibility by evacuating them from the areas expected to be bombed. This reason for evacuating was not as substantial as most, and was part of an accumulating number of reasons which led the British government to decide to evacuate. ...read more.

The period at the start of the war was even given the name 'Sitzkrieg' as a pun on the German Blitzkrieg. Also, if the British authorities could publicise the evacuation it could draw the public's attention away from the crisis in the Atlantic. The result of this is that the British population would not criticise the government and those in it for managing the country poorly. This reason for evacuating is a political cause for the evacuation at the start of the war. The lack of progress in the war, and sinking of ships all happened from 1939 onwards and so this can be classified as a short term reason. Although there were many reasons for the evacuation of children at the start of the war from Britain's industrial cities, some varied significantly from one another. Some reasons were long term, some short term. And there were also political and economical reasons as well. However the main reason among these is almost certainly the protection of the population which can classified as mainly an economic reason. Tom Murphy ...read more.