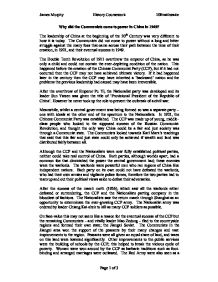 Why did the Communists come to power in China in 1949?

Why did the Communists come to power in China in 1949? The leadership of China at the beginning of the 20th Century was very different to how it is today. The Communists did not come to power without a long and bitter struggle against the many foes that came across their path between the time of their creation, in 1921, and their eventual success in 1949. The Double Tenth Revolution of 1911 overthrew the emperor of China, as he was only a child and could not contain the ever-depleting condition of the nation. This happened before the creation of the Chinese Communist Party (CCP), but if it had not occurred then the CCP may not have achieved ultimate victory. If it had happened later in the century then the CCP may have inherited a 'backward' nation and the problems the previous leadership had caused may have been irreversible. After the overthrow of Emperor Pu Yi, the Nationalist party was developed and its leader Sun Yatsen was given the title of 'Provisional President of the Republic of China'. However he never took up the role to prevent the outbreak of a civil war. Meanwhile, whilst a central government was being formed so was a separate party - one with ideals at the other end of the spectrum to the Nationalists. In 1921, the Chinese Communist Party was established. ...read more.

Winning the support of the masses, as in the peasants, would always be the key to success in China; it could always be said that if a party has the support of the masses then they will take control of a country. This was always an obstacle with the Nationalist party who failed to abandon partly their capitalist ideas. With the CCP taking more and more land from the Nationalists, Chiang Kai-shek knew that something had to be done about the CCP. In 1930 he launched his first 'Extermination Campaign' against the CCP. He sent a large army into the Jiangxi Soviet, but they were beaten with consummate ease by the CCP. This was due to the CCP using guerrilla tactics, such as ambushing groups of Nationalist soldiers and attacking at nighttime. Chiang launched three more campaigns and three more times he failed to stop the strength and will of the CCP. His fifth and final extermination campaign in 1934 would have more success. Chiang changed the tactics of his army by building blockhouses and digging trenches so the CCP could not use their guerrilla tactics against them. The CCP, too, changed their tactics as Otto Braun became their new military leader. Braun sent the Red Army into head-on battles where they were easily picked off. By October 1934 the future of the CCP looked bleak, the only way to survive this campaign was by running from the enemy. ...read more.

The Nationalists looked set to win the war with great ease; they had three million American troops, much better weapons than the CCP, all the major cities, main railways lines and the support of many foreign countries. The Nationalists had this phenomenal equipment yet were still beaten by the inferior CCP army. This was firstly due to the problems seen in Nationalist areas; inflation was rapid and soon enough nobody could afford the basic means to live. This forced people to loot and riot just to survive. The Nationalist Blue-shirts tried to control this through harsh methods but this only sent more people on to the side of the CCP. The CCP's victory was also down to the fantastic military leadership of Mao Zedong, who brought his men together and motivated them in such a manner to beat a much stronger army at the Battle of Huai-Hai. There is no one single reason for the Chinese Communist Party coming to power in 1949; their success is one of great complexity and it saw many desperately needed changes and improvements to the newly named People's Republic of China. In my opinion I think that the major reason for the success of the CCP was because of the people, the people who sided with the CCP after that's what the CCP believed in equality for all and the CCP not only believed in but implemented this equality. James Murphy History Coursework 10Braithwaite Page 1 of 3 ...read more.