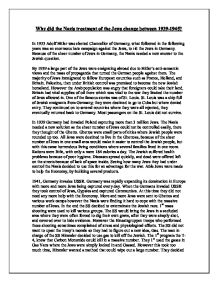 Why did the Nazis treatment of the Jews change between 1939-1945? In 1933 Adolf Hitler was elected Chancellor of Germany, what followed in the following years was an enormous hate campaign against the Jews, to rid the Jews in Germany. Because of the sheer number of Jews in Germany, the Nazis needed a new answer to the Jewish question. By 1939 a large part of the Jews were emigrating abroad due to Hitler's anti-semantic views and the mass of propaganda that turned the German people against them. The majority of Jews immigrated to fellow European countries such as France, Holland, and Britain. Palestine, then under British control was promised to become the new Jewish homeland. However the Arab population was angry that foreigners could take their land. Britain had vital supplies of oil there which was vital to the war they limited the number of Jews allowed in. One of the famous stories was of St. Louis. St. Louis was a ship full of Jewish emigrants from Germany; they were destined to go to Cuba but where denied entry. ...read more.

The SS would bring the Jews in a secluded area where they were often forced to dig their own grave, after they were simply shot, and covered over to hide evidence. However the Einsatzgruppen troops who performed these shooting sometimes complained of stress and physiological effects. The SS did not want to upset the troop's morale so they had to figure out a new idea, Gas. The man in charge of the SS Himmler decided to use gas to kill off the Jewish. The 1st program the T-4, knew that Carbon Monoxide could kill in a massive number. They 1st used the gases in Gas Vans where the Jews were simply locked in and Gassed. However this took too much time, Himmler wanted a method that could wipe out a large number. They decided to Gas Chambers. The 1st death camp was in Chelmno. The Jewish people were transported there and told to strip and enter a massive warehouse where they would be cleaned. The Jewish people followed, not knowing that Carbon Monoxide would enter. ...read more.

To some this involved over 600 miles of walking. Many died as Rations were rarely given out and people died of diseases. They needed to hide the Jewish genocide from the rest of the world, the plan was to bring the Jews back and simply kill them all. More and more camps and bodies were being found. Soldiers starting to lose faith in the war and abandon their posts, everything thing was being falling apart compared to earlier when they seemed unbeatable. There's no doubt that the Nazis wanted the Jews exterminated. Earlier in the war when they were simply cruising to victory the extermination of Jews was their top priority. As the war raged on they introduced Gas Chambers which could wipe out hundreds, if this continued the Jews wouldn't have been here today. As more and more Jews were found, the Nazis discovered that drastic measures needed to be taken for the massive number of Jews found. However when there domination was being threatened they had to concentrate saving their own people, they wanted to remain secret to the outside world as they knew if they would find out, it would be a unspeakable crime against the world and disgrace the German people forever. By Peter Lam ...read more.