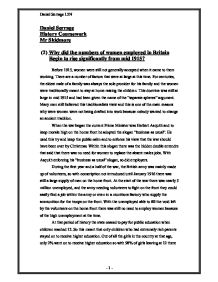 Why did the numbers of women employed in Britain Begin to rise significantly from mid 1915?

Daniel Serrage History Coursework Mr Skidmore (2) Why did the numbers of women employed in Britain Begin to rise significantly from mid 1915? Before 1915, women were still not generally accepted when it came to them working. There are a number of factors that were at large at this time. For centuries, the eldest male of a family was always the sole provider for his family and the women were traditionally meant to stay at home raising the children. This doctrine was still at large in mid 1915 and had been given the name of the "separate spheres" argument. Many men still believed this traditionalists view and this is one of the main reasons why were women were not being drafted into work because nobody wanted to change an ancient tradition. When the war began the current Prime Minister was Herbert Asquith and to keep morale high on the home front he adopted the slogan "business as usual". He used this try and keep the public calm and to enforce his view that the war should have been over by Christmas. Within this slogan there was the hidden double entendre that said that there was no need for women to replace the absent males jobs. ...read more.

An example of this was that they had the power to override union objectors who were opposed of the employment of women, but this power was only really used when David Lloyd George replaced Asquith as Prime Minister. In May 1915 it was recognised that the war needed much more organisation on the home front. So with the British public in mind a coalition government (which was called a national government) was formed with politicians from all parties to control the home front. In July 1915 the British army on the western front were facing a severe shortage of shells and ammunition. This is where Davis Lloyd George was introduced onto the "big stage" to help out with the war effort. After the shell shortage the government created the Ministry of Munitions which was fronted by Lloyd George. His main aim was to reorganise Britain's and to do this he worked very closely with a number of people, one of whom was Mrs Pankhurst( a suffragette leader) to organise a "women's march for jobs" to recruit women to work in factories and to persuade factory owners to employ women for the war effort. ...read more.

During this time Britain became very close to surrender (at one point 6 weeks!); because of this the women's land army was formed to grow food to feed the population. With the power of DORA the government took over 2 and a half million acres of farmland to grow enough food to feed the population. When the war began and Asquith was using his "business as usual". He did not want social change all over Britain and this included the armed forces, but as 1916 grew older the armed forces opened up there doors to women and number of divisions were created, these are: the Women's Auxiliary Arms Corps (WAAC), the Voluntary Aid Detachments (VAD), the Women's Royal Naval Service (WRNS) and the Women's Royal Air Force (WRAF). Statistical wise, there was an overall increase in the following industries which employed women: In 1914 there were 2,178,600 in the manufacturing industry but by the end of the war there were 2,970,600 which is a 36.4% increase. There is an even greater increase in civil servants and teachers where in 1914 there were 262,000 but in 1918 there were 460,000 which is roughly a 40% rise. In conclusion there are a number of factors that all contributed to the increase of women in employment from mid 1915 onwards. Daniel Serrage L5N - 1 - ...read more.