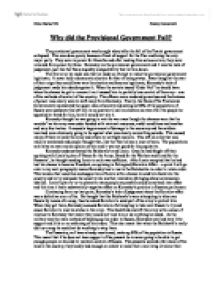 Why did the Provisional Government Fail?

Why did the Provisional Government Fail? The provisional government was brought about after the fall of the Tsarist government collapsed. This was done purely because of lack of support for the Tsar and being the only major party. They were in power for 8months and after making five serious errors; they were removed from power by force. Kerensky ran the provisional government and it was his lack of judgement, just like the Tsars stupidity and gullibility that let him down. The first error he made was that he made no attempt to make the provisional government legitimate. It never held a democratic election for fear of losing status. Even though at the start of their reign they could have won the election and become legitimate, Kerensky's lack of judgement made him decide against it. When the soviets issued 'Order No1' he should have taken the chance he got to remove it as it caused him to partially lose control of the army - one of his methods of control of the country. ...read more.

Lenin's plan to try to please as many people as possible could come back into effect and this time it had a substantially negative effect on Kerensky's position in Russian parliament. Continuing from my last point, Kerensky's lack of judgement about the Kornilov affair was a definitive error of his. He thought that the Bolshevik's were attempting to take over Russia by means of a coup, thus he asked Kornilov to send part of his army to protect him. When they got there, Kerensky accused Kornilov of attempting to take over Russia to try and cause Kornilov to lose his status in the army. This backfired and left the army with a sense of mistrust to Kerensky that meant they would not trust him or do anything he asked. As the military was the main method of backing up his order in Russia, Kerensky now had very little support and little or no enforcing of his orders. This also meant that when the Bolshevik's really did try a coup he could not do anything to stop them. ...read more.

Most of the reasons show him as being the reason the Duma fell and that the failure of the provisional government was due to him. By not taking out his enemies (the Bolshevik's and Lenin) when he had the chance he made a clear and obvious mistake as was shown when Lenin came back after the Kornilov affair. However hot being able to decide on any one course of action also left him in a bad situation, trying to go 50-50 with the peasants would not work as was shown when he ended up with both of the bad parts (losing the land and not gaining popularity). His lack of judgement was the stem of all his problems, continuation of war was his choice, the Kornilov plot was his idea, the indecision to give land to the peasantry was his plan and underestimating the Bolshevik's and Lenin was his judgement. I think the point at which everything started collapsing around him was after the Kornilov affair purely because it lost him so much support from his army (the basis of control in Russia) and the people. Chris Charles 5H2 History Coursework ...read more.