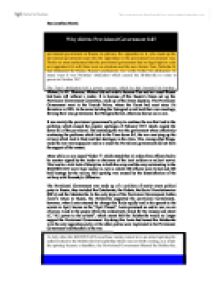 Why did the Provisional Government fail?

By doing this Lenin had turned the Bolsheviks in to the only opposition party, all the other parties were implicated in the Provisional Government and therefore in the war. In July when the KRONSTADT naval base mutiny turned in to an armed uprising the sailors looked to the Bolsheviks for leadership which was not forth coming, as a result the uprising became a shambles, the Provisional Government blamed the Bolsheviks, arrested Trotsky, and issued a warrant for Lenin's arrest. Lenin escaped to Finland and it looked as if the Bolsheviks were finished. That was until they were thrown a life line in the form of the "Kornilov affair". In July Miliukov called for a military coup to over throw the government, as a result Kerensky restored the death penalty in a bid to give the Provisional Government some form of power, this failed and on July 24th Kerensky formed the second Coalition (Provisional) Government. In mid August he called a State Conference in Moscow to generate national unity. The conference made no decisions but Kerensky emerged as the dominant political personality and General Kornilov, the new Commander-in-Chief, as the darling of the middle classes. ...read more.