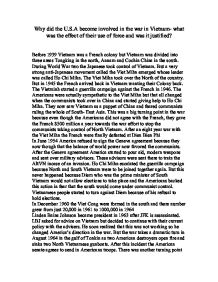 Why did the U.S.A become involved in the war in Vietnam- what was the effect of their use of force and was it justified?

Why did the U.S.A become involved in the war in Vietnam- what was the effect of their use of force and was it justified? Before 1939 Vietnam was a French colony but Vietnam was divided into three areas Tongking in the north, Annam and Cochin China in the south. During World War two the Japanese took control of Vietnam. But a very strong anti-Japanese movement called the Viet Mihn emerged whose leader was called Ho Chi Mihn. The Viet Mihn took over the North of the country. But in 1945 the French arrived back in Vietnam wanting their Colony back. The Vietminh started a guerrilla campaign against the French in 1946. The Americans were actually sympathetic to the Viet Mihn but that all changed when the communists took over in China and started giving help to Ho Chi Mihn. They now saw Vietnam as a puppet of China and feared communists ruling the whole of South- East Asia. This was a big turning point in the war because even though the Americans did not agree with the French, they gave the French $500 million a year towards the war effort to stop the communists taking control of North Vietnam. ...read more.

In 1966 the Americans began search and destroy missions. This is where American troops would go into villages which they believed were protecting or sympathizers with the Vietcong. They would round up all Vietcong suspects an interrogate them. After this the village would be burned to the ground. Many innocent people were killed in these operations. The Americans realized they were loosing the trust of the people, so they decided to introduce the 'pacification policy'. This policy meant that all refugees would be rehoused, the us would provide clinics and schools and build roads, bridges, canals and drainage ditches. But this was seen as too little too late and had very limited success. The My Lai village was witness to the biggest massacre in the Vietnam War. American soldiers who were part of a search and destroy mission murdered 400 men women and children. It was believed that My Lai was full of Vietcong or Vietcong sympathizers. This is how they justified their actions but they did not find any Vietcong or weapons. The Americans started using chemical weapons in 1968. They saw it as a justified way to defeat the enemy. ...read more.

They destroyed many North Vietnamese targets. Over Christmas a huge bombing campaign took place by the Americans against the North Vietnamese. In January 1973peace talks were renewed in Paris. Nixon believed that the war was now over and withdrew all American troops. North Vietnam took advantage of this and invaded South Vietnam. American involvement in Vietnam was initially to train the ARVN by sending in advisors and had no intention of going to fight a war. However when American soldiers came under fire from the NVA so they had to protect the South Vietnamese. This Justified America going in to Vietnam. The tactics used by the Americans like the search and destroy missions were said to be very brutal however the Vietcong and the NVA used similar brutality if not worse when they captured American troops. So the tactics used by the Americans could be seen as a acceptable response. The chemical weapons used by the Americans caused people to have birth defects and contaminated the environment however the Americans were trying to win a war and without the use of chemical weapons they could not see their enemy. So the Americans can be justified in using chemical weapons because they were in a war and they were trying to win it. ...read more.