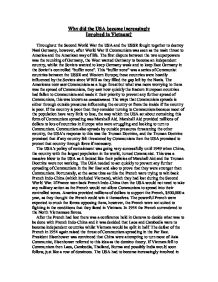 Why did the USA become increasingly Involved in Vietnam? Throughout the Second World War the USA and the USSR fought together to destroy Nazi Germany, however, after World War II Communism was seen as the main threat to America and the American way of life. The first dispute between the two superpowers was the reuniting of Germany, the West wanted Germany to become an independent country, whilst the Soviets wanted to keep Germany weak and to keep East Germany in the Soviet's controlled "buffer zone". This "buffer zone" was a series of Communist countries between the USSR and Western Europe; these countries were heavily influenced by the Soviets since WWII as they filled the gap left by the Nazis. The Americans now saw Communism as a huge threat but what was more worrying to them was the spread of Communism, they saw how quickly the Eastern European countries had fallen to Communism and made it their priority to prevent any further spread of Communism, this was known as containment. The ways that Communism spreads is either through outside pressures influencing the country or from the inside if the country is poor. If the country is poor then they consider turning to Communism because most of the population have very little to lose, the way which the USA set about containing this form of Communism spreading was Marshall Aid. ...read more.

Instead of attacking Vietnam, the USA provided even more financial aid; they could not leave the South because of the risk that the domino theory would become a reality. In 1960, North Vietnam set up the National Liberation Front a.k.a. Vietcong. The Vietcong had three main objectives, they were: to unite the North and the South into one Communist country, to get rid of Diem and also to get rid of America. The American's saw this as a declaration of war as the Vietcong were saying that they would attack the South. At this time the South was doing very badly, Diem was corrupt and hugely unpopular, an example of this was that people were prepared to burn themselves to death in protest against Diem's rule. This in turn made the USA look bad as they too became unpopular as they were closely linked to Diem. The main problem with Diem's unpopularity was that it made the American way of life look bad and therefore made more people support Communism. The USA was angry because they were backing Diem and he was failing them, over 30% of the South had been taken over by the Vietcong by this time. ...read more.

The Truman Doctrine claimed that the USA would support any countries that are being influenced by outside pressures to become Communist and the fall of China made the USA look weak, as their policy of containment was not working. At the time France was at war over French Indo-China so the USA provided financial aid to France so that they would win and prevent any further spread of Communism. When the French lost the USA had to become increasingly involved with Vietnam, as they could not leave because of the fear of Eisenhower's domino theory becoming a reality. Events happening in Vietnam then lead to the USA having to decide whether to stay in Vietnam or not. President Kennedy chose to pull the US forces out of Vietnam, however he was killed before he could enforce this decision. His successor, LBJ, chose differently to Kennedy and ordered the sending in of ground troops to Vietnam. The reason why the USA became increasingly involved with the Vietnam was because of the perceived threat from the spread of Communism, all the time the USA were trying to contain the spread of Communism from the North to the South and their involvement increased because the threat of the South becoming Communist increased. By David Alison 10DLM ...read more.