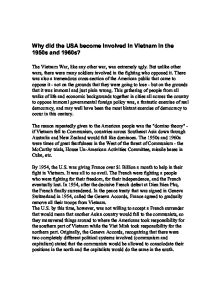 Why did the USA become involved in Vietnam in the 1950s and 1960s? The Vietnam War, like any other war, was extremely ugly. But unlike other wars, there were many soldiers involved in the fighting who opposed it. There was also a tremendous cross-section of the American public that came to oppose it - not on the grounds that they were going to lose - but on the grounds that it was immoral and just plain wrong. This gathering of people from all walks of life and economic backgrounds together in cities all across the country to oppose immoral governmental foreign policy was, a fantastic exercise of real democracy, and may well have been the most blatant exercise of democracy to occur in this century. The reason repeatedly given to the American people was the "domino theory" - if Vietnam fell to Communism, countries across Southeast Asia down through Australia and New Zealand would fall like dominoes. ...read more.

The U.S. backed government in the south (not a national government yet, just a bureaucracy to take care of necessary business) refused to sign the Geneva Accords (France and the Viet Minh did). Thus, because they did not sign, the southern Vietnamese leaders felt (with U.S. encouragement) that they were not obliged to live up to the terms of the Accords. Then, with U.S. military and economic help, a U.S. picked southern Vietnamese leader, Ngo Dinh Diem, assumed the leadership of a U.S. sponsored Republic of Vietnam The U.S. even wrote the constitution for the new "country." All with the idea that they were saving at least a part of Vietnam from falling to the communists. From 1956 until his assassination in 1963 (just weeks before John F. Kennedy's assassination) Diem ran South Vietnam (SVN) as a tyrant, with the U.S. backing his every move. The U.S. also kept increasing the numbers of U.S. ...read more.

erroneously misread the Communist world as united, and tragically misread the Vietnamese desire for independence from all exploiters including the Chinese. Tuchman does not condemn all war, but says some wars seem just or inevitable - America's entry into World Wars I and II, for example. And she refrains from using hindsight to judge the US involvement in Vietnam. Rather, she finds compelling evidence that the five Presidents ignored the advice of many respected experts who strongly opposed U.S. intervention in Vietnam - including Army Chief of Staff General Matthew Ridgeway, Marine Corps Commandant General David Shoup, Senate Majority Leader Mike Mansfield and Edwin O. Reischauer (Asia expert and future U.S. Ambassador to Japan.) Many experienced leaders believed strongly at the time that this was a vital and necessary war. Hindsight, of course, is always clearer than sight during the heat of battle. In his 1995 book, Robert McNamara, U.S. Secretary of Defense under both Kennedy and Johnson, makes the devastating admission that the U.S. involvement in war with Vietnam was a mistake. He writes, "Yet we were wrong, terribly wrong. We owe it to future generations to explain why." ...read more.