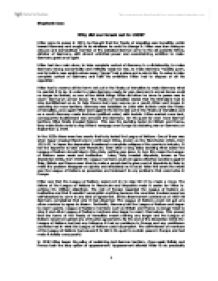 Why did war break out in 1939? Hitler came to power in 1933, he thought that the Treaty of Versailles was incredibly unfair toward Germany and sought to do whatever he could to change it. Hitler rose from being an obscure and demoralised member of the defeated German army to the all powerful f�hrer, dictator of Germany, with almost unlimited power and overwhelming ambition to make Germany great once again. Hitler had four main aims; to take complete control of Germany in a dictatorship, to make Germany strong economically and militarily ready for war, to make Germany "racially pure", and to build a new society where every "Aryan" had a place and a role in life. In order to take complete control of Germany and fulfil his ambitions Hitler had to dispose of all his opposition. Hitler had to reverse all the terms set out in the Treaty of Versailles to make Germany what he wanted it to be. In order to make Germany ready for war, Germany's armed forces could no longer be limited, so one of the initial things Hitler did when he came to power was to rearm Germany's armed forces. ...read more.

The self-interest of members of the League of Nations had caused it to fail in its quest to sustain peace in Europe and had made it totally unsuccessful. In 1936 Hitler began his policy of reclaiming lost German territory. Once again Britain and France took the easy option of appeasement. Appeasement allowed Hitler to do practically anything, including claiming more territory for Germany. Appeasement encouraged Hitler to be aggressive, every time Hitler got away with acts of aggression he became even more certain that Britain and France would do nothing to stop him. If Britain and France had done something in the early stages, when Germany was weakest, they would have stood more of a chance of limiting German ambition, but Germany was annexing more and more land and subsequently becoming stronger and stronger. Hitler was succeeding in fooling world leaders by promising that he wouldn't do anything bad. Because Britain and France did not stand up to Hitler when he invaded Czechoslovakia, Stalin believed that Britain would not help the USSR either if Hitler invaded it. This persuaded Stalin that he should reach an agreement with Germany and, on August 23, 1939, the Nazi-Soviet Pact was signed. ...read more.

If members of the League of Nations were able to agree on what actions they should take then the Manchurian and Abyssinian Crisis would have been solved, showing that the League of Nations could uphold its laws and have influence over the actions of other countries, that the League of Nations shouldn't be disputed. I also believe that appeasement was an enormous mistake. Hitler's confidence in himself grew too strong. So strong in fact that he believed he could do anything and no one would challenge him. If Britain and France, or any other country, had tried to stop him when he first started rearming or when he invaded the Rhineland, World War II could have been avoided. What politicians didn't know when Hitler sent troops into the Rhineland was that they had orders to retreat if they came up against any opposition. If Hitler was stopped in the early stages of his ambitious scheme, when he first started going against the wishes of the League of Nations and the Treaty of Versailles, I doubt that World War II would have happened. ?? ?? ?? ?? Stephanie Case 1 ...read more.