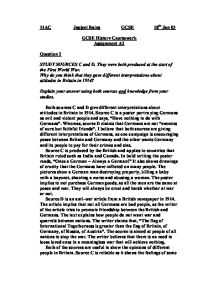 Why do you think that they gave different interpretations about attitudes in Britain in 1914?Explain your answer using both sources and knowledge from your studies.

11AC Jagjeet Bains GCSE 18th Jan 03 GCSE History Coursework Assignment A2 Question 2 STUDY SOURCES C and D. They were both produced at the start of the First World War. Why do you think that they gave different interpretations about attitudes in Britain in 1914? Explain your answer using both sources and knowledge from your studies. Both sources C and D give different interpretations about attitudes in Britain in 1914. Source C is a poster portraying Germans as evil and violent people and says, "Have nothing to do with Germans". Whereas, source D claims that Germans are not "enemies of ours but faithful friends". I believe that both sources are giving different interpretations of Germans, as one campaign is encouraging peace between Britain and Germany and the other wants Germany and its people to pay for their crimes and sins. ...read more.

The article implies that not all Germans are bad people, as the writer of the article tries to promote friendship between the British and Germans. The text explains how people do not want war and quarrels between nations. The writer claims that, "The flag of International Togetherness is greater than the flag of Britain, of Germany, of Russia, of Austria". The source is aimed at people of all nations to stop the war. The writer believes that there is no need to loose loved ones in a meaningless war that will achieve nothing. Both of the sources are useful to show the opinions of different people in Britain. Source C is reliable as it shows the feelings of some British citizens. ...read more.

Many people believed that German was the main cause of the outbreak of World War I. The sources have limited information available as source C is biased against the Germans and source D is biased towards the Germans. Source C is partly fact as many of the events pictured did actually occur. The Germans did commit murders in German concentration camps and they also bombed British Churches and Cathedrals during the Blitz, where they bombed several major British cities such as Coventry and London. In conclusion, I believe that both sources give different interpretations about attitudes in Britain because they both had different aims. Source C wanted the hatred of Germany to become stronger, whereas source D wanted British citizens to see that Germans were "faithful friends". ...read more.