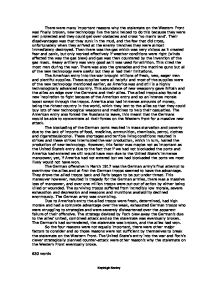 Why the stalemate on the Western Front was finally broken.

There were many important reasons why the stalemate on the Western Front was finally broken, new technology like the tank helped to do this because they were well protected and they could get over obstacles and cross 'no man's land'. Their disadvantages was that they sunk in the mud, and the few that did cross, unfortunately when they arrived at the enemy trenches they were almost immediately destroyed. Then there was the gas which was very vicious as it created fear and panic, but only worked effectively if weather conditions were right (winds affected the way the gas blew) and gas was then countered by the invention of the gas mask. Heavy artillery was very good as it was used for attrition. This killed the most men during the war. ...read more.

The American entry also forced the Russians to leave, this meant that the Germans would be able to concentrate all their forces on the Western front for a massive new attack. The blockading of the German ports resulted in mass starvation and poverty due to the lack of imports of food, medicine, ammunition, chemicals, petrol, clothes and cigarettes/alcohol. These shortages and terrible living conditions resulted in strikes and these strikes interrupted the war production, which in turn, halted the production of new technology. However, this factor was maybe not as important as the United State's entry due to the fact that if we had not blockaded the ports and America had entered we still would have won due to the United State's immense manpower, yet, if America had not entered but we had blockaded the ports we most likely would not have won. ...read more.

The German army was crumbling. Due to America's entry the allied troops were fresh, determined, had high morale and had a complete advantage over the weak, exhausted German troops who were struggling to strategize and were severely disheartened over the apparent failure of their offensive. The strategy devised by Foch blew away the German's due to the allies' united, combined attack and so the stalemate was eventually broken. The German's had surrendered, the stalemate was broken, and the allies had won. So the four reasons were not equally important, there were other major factors to consider and so those reasons were not sufficient by themselves to break the stalemate on the Western Front. The United State's entry into the war and Foch's clever strategically planned counter-attack were other reason's why the stalemate on the Western Front eventually broke. 630 words Kayleigh Sonley ...read more.