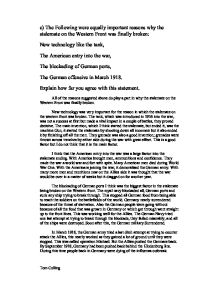 Why the stalemate on the Western Front was finally broken

I think that the American entry into the war was a large factor into the stalemate ending. With America brought men, ammunitions and confidence. They made the war a world war and fort with spite. Many American men died during World War One. With the Americans joining the war, it demoralised the German army. With many more men and munitions now on the Allies side it was thought that the war would be over in a matter of weeks but it dragged on for another year. The blockading of German ports I think was the biggest factor in the stalemate being broken on the Western front. ...read more.

Soon after this, the German military Surrendered. In March 1918, the German army tried a last ditch attempt at trying to counter attack the Allies, this nearly worked as they gained a lot of ground until they were stopped. This was called operation Michael. But the Allies pushed the Germans back. By September 1918, Germany had been pushed back behind the Hindenburg line. During this time people back in Germany were dying of the influenza outbreak. So in all I think that the Americans joining the war was the biggest factor. I think that the spring offensive is the least likely factor into why the stalemate was broken. But all these factors as I stated at the beginning are all important reasons into why the stalemate along the Western Front was broken. Tom Culling ...read more.