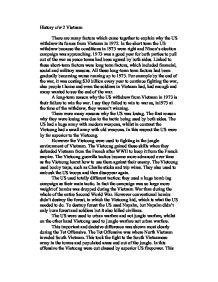 Why the US withdrew its forces from Vietnam in 1972.

History c/w 2 Vietnam There are many factors which came together to explain why the US withdrew its forces from Vietnam in 1972. In the short term the US withdrew because the conditions in 1973 were right and Nixon's election campaign was approaching. 1973 was a good year for both parties to pull out of the war as peace terms had been agreed by both sides. Linked to these short-term factors were long term factors, which included financial, social and military reasons. All these long-term term factors had been gradually becoming worse running up to 1973. For example by the end of the war, it was costing $30 billion every year to continue fighting the war, also people t home and even the soldiers in Vietnam had, had enough and many wanted to see the end of the war. A long-term reason why the US withdrew from Vietnam in 1973 is their failure to win the war. I say they failed to win to war as, in1973 at the time of the withdraw, they weren't winning. There were many reasons why the US was losing. The first reason why they were losing was due to the tactic being used by both sides. The US had a huge army with modern weapons, whilst in contrast the Vietcong had a small army with old weapons. In this respect the US were by far superior to the Vietcong. However the Vietcong were used to fighting in the jungle environment of Vietnam. The Vietcong gained these skills when they defended Vietnam from the French after WWII to keep it from the French empire. ...read more.

These demonstrations gave rise to the hippy movement, which favoured peace and love instead of war. One example of these protests is the Ohio university demonstration in which students were expressing their views when the US National Guard opened fire on the protesters killing some of them. Therefore because of the war Americans were killing Americans, which would've made the US withdraw from the war as this shows how bad people, thought the war was. On the other hand the media was concentrating on the war and these demonstrations, which meant that the Civil Rights Movement lost its interest amongst the media. Therefore the Civil Rights Movement lost press interest and people became more interested in the war. This point leads me onto the racially related reasons why the US withdrew from Vietnam in 1973. The black community were unhappy with the war because proportionally more blacks were being sent to Vietnam than any other social or ethnic group. This would have made the black community unhappy with the Vietnam War because it would've meant more blacks were being sent to Vietnam than were supposed to be. We can tell that some blacks were upset because martin Luther king made a speech in which he expressed his view that he was concerned that the black US soldiers were being sent over to Vietnam. They were being sent in order to fight for a sense freedom for the Vietnamese people, which they do not even have for them selves. Still in today's world proportionally more blacks are in the US army than any other ethnic group. This wasn't the only reason the black community had to be upset about; Johnson's 'great reform' was cut back. ...read more.

These categories can be explained like a football game. The build up to a goal is the long-term effect of a goal, whilst the short-term effect of a goal is the shot. I have considered the significance of the reasons and concluded that factors working together have led to the point where the US feels they have to withdraw from Vietnam. However I have I felt the timing of the withdraw was significant. I say this because of the elections which where approaching. Nixon's main reason to withdraw was that he wanted to win another session in power. Nixon also felt that these elections were a point where the US could move on from the Vietnam War. These facts therefore raise the question that would the US have withdrew from Vietnam that year if there weren't any elections? My view on this is that I believe they wouldn't have withdrawn from Vietnam if there hadn't been presidential elections in that year. Another reason why I felt the timing of the withdraw was so significant was that a new super power had arisen onto the international stage. The US felt that if it pulled out of the Vietnam war it would be easier to make friends with China as they were next to Vietnam and wouldn't have liked that fact that the US were waging a war so close to them. Also China was a communist country and they were trying to prevent communism spreading in Vietnam, which would've made China weary of the US, as they obviously didn't like communism. This also raises the question what would have happened if China, a new super power, didn't arise at that time. Would this have left the US with less incentive to leave the war and withdraw from Vietnam in 1973? ...read more.