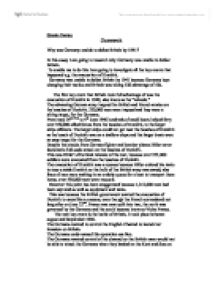 Why was Germany unable to defeat Britain by 1941?

The government did a number of steps to try and protect the civilians, the government ordered a total blackout, street and vehicle lights were shielded and dimmed, everybody was issued with a gas mask, and it was an offence to show a light. Windows were to be taped up so to avoid flying splinters when the windows were smashed. Sand bags protected important buildings, some people erected Anderson bomber shelters in their gardens and some used Morrison shelters in their homes. In towns there were public shelters, some families spent the night on the London underground platforms as they thought this was the safest place to be. The blitz was called off in 1941 due to the weather becoming worse and Hitler had changed his plans to invade the USSR, as Hitler no longer thought Britain would be a threat to him. Although air raid precautions were effective the Luftwaffe failed to break the morale of the British people, by now over 40,000 had been killed and 2 Million had been made homeless. Not only was London attacked but also so were many British cities Manchester, Glasgow, Liverpool etc. The worse affected places were Coventry and Plymouth. The next key event is the invasion of the USSR; also know as operation barborossa in June 1941. ...read more.

families sleeping on the underground platform, saved many peoples lives. The invasion of the USSR helped Germany to fail to defeat Britain by 1941 because when Hitler declared war on Russia he didn't expect to fight them in winter because the winter in Russia reaches below freezing point and as the weather worsened, thousands of the German soldiers were killed or captured, as they didn't have the right clothing for there winter, also 20 million Russian people died. The role of Winston Churchill (British prime minister) helped Germany to fail to defeat Britain by 1941 because Hitler wanted to break the morale of people in the blitz but failed because Roosevelt (American president) visited bombsites and made very dramatic speeches, which helped keep up the spirits up of the people when the war was at its worst. Even though wartime propaganda was exaggerating his importance. The role played by the USA helped Germany fail to defeat Britain because America provided valuable food and weapons to Britain. This was called lense lease this was introduced in March 1941, when America declared war on Japan, Germany joined into help Japan, but with the USA providing Britain with weapons and equipment, the British could help America s they were all ready at war with Germany. I also think that Germany failed because Germany made a lot of mistakes by going into a lot of the wars unprepared, tired and weak. ...read more.