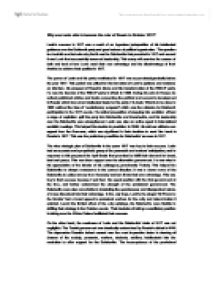 Why was Lenin able to become the ruler of Russia in October 1917?

Why was Lenin able to become the ruler of Russia in October 1917? Lenin's success in 1917 was a result of an ingenious juxtaposition of his intellectual guidance over the Bolshevik party and good seizure of political opportunism. The question is a twofold one that asks why first it was the Bolsheviks that prevailed in 1917 and second it was Lenin that successfully assumed leadership. This essay will examine the causes of both and look at how Lenin used their own advantage and the disadvantage of their rivalries to achieve their position in 1917. The power of Lenin and his party manifested in 1917 was accumulated gradually before the year 1917. This period was critical for the formation of Lenin's opinions and revisions on Marxism, his prospect of Russia's future and his transformation of the RSDLP party. ...read more.

This was the preliminary condition for Bolsheviks' success in 1917. The wise strategic plan of Bolsheviks in the years 1917 was key to their success. Lenin had an accurate and sympathetic grasp of the peasants' and workers' anticipation, and in response to this proposed the April thesis that promised to fulfill their demand for bread, land and peace. This won them support over the alternative government. He was wise in his appreciation of the talents of his colleagues, prominently Trotsky. This helped the Bolsheviks to always maneouvre in the correct direction. It was a clever move of the Bolsheviks to collect armory from Kerensky and turn it into their own advantage. This was key to their success because it put them into equal position with the rival government at the time, and further undermined the strength of the provisional government. ...read more.

The depression Russia's defeat caused was the most imperative factor in drawing all classes of the society, peasants, workers, students, soldiers, intellectuals into the revolution to offer support for the Bolsheviks. The incompetence of the provisional government was also important. Their insistence on continuing the war and inability to provide economic stability discredited them among the population. This made Bolsheviks' promises more appealing. The internal division between the leaders of the provisional government was also instrumental for the Bolsheviks. The Kornilov affair manifested the mutual distrust between political and military leaders in the provisional government. Their weakness created a power vacuum in the time of 1917 that was potentially available to the Bolsheviks. This vacuum was well exploited by Lenin and Trotsky. To sum up, the Bolsheviks' success in 1917 was dependent on both their own wisdom, determination and ambition and the lack of these features on their rivals' side. ?? ?? ?? ?? ...read more.