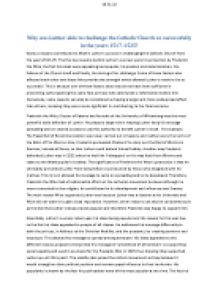 Why was Luther able to challenge the Catholic Church so successfully in the years 1517-1525?

﻿10.11.12 Why was Luther able to challenge the Catholic Church so successfully in the years 1517-1525? Various reasons contributed to Martin Luther?s success in challenging the Catholic Church from the years 1517-25. The five key reasons behind Luther?s success were his protection by Frederick the Wise, the fact his ideas were appealing and popular, his passion and determination, the failures of the Church itself and finally, the timing of his challenge. Some of these factors also affected each other and these links provide the strength which allowed Luther?s revolt to be so successful. This is because one of these factors alone would not have been sufficient in preventing Luther gaining the same fate as those who attempted a reformation before him. Conversely, some reasons can also be considered as having a larger and more widespread effect than others, meaning they were more significant in contributing to the final outcome. Frederick the Wise, Elector of Saxony and founder of the University of Wittenberg was the most powerful early defender of Luther. He played a large role in helping Luther keep his message spreading and on several occasions used his authority to benefit Luther?s revolt. ...read more.

Many also committed clerical abuses such as pluralism and simony. As a result, people generally had the growing feeling they were being exploited for their money and faith. This feeling over anticlericalism was further developed from Luther?s ideas. It is also a reason for the fact Luther?s ideas were popular, because they could be related too and agreed with. Failures of the Church were not a directly significant reason for Luther?s success, it allowed him to gain more support but only because his ideas were popular. Anticlericalism had been around for a long time, and only enhanced the popularity of his message as it coincided with a time when intolerance towards church failures was increasing. Another reason for Luther?s ideas proving popular was due to his personality and passion for making a change. This passion is seen through his obsession with finding salvation. In addition, he was fearless in putting his point across regardless of consequences such as in 1519 in his debate with Johann Eck where he argued his ideas confidently and 1521 at the Diet of Worms, where he claimed that by recanting, he would be promoting tyranny and his conscience would not allow him to do so, therefore he would not be silenced. ...read more.

But this alone would not have made him so successful. His personality played a role by making him determined to speak up about it and therefore gain more support, making his ideas even more popular. Without these two factors working together, he never would have gained strong enough support to form a fully fledged reformation. However, more importantly than his personality was the protection he acquired from Frederick the Wise; this kept him from Harm?s way and allowed his message to carry on spreading. Additionally, to this was the significance of the timing of his actions. It turned what would have been a small rebellion into a national reorganization of the Church, due to the printing press and Renaissance era. Finally, but with less slightly less importance, was the Church?s own failures. On one hand it was important to his success because it emphasised the corruption he was describing, making it more relatable. On the other hand, anticlericalism had been around for a long time, it only emphasised his message but did not contribute to its successfulness. In summary, all five factors played an important role however the most important were that his ideas proved popular , due to his personality, and his protection by Frederick the Wise. The other elements played lesser roles but were still important in helping his message spread to a wider audience. ...read more.