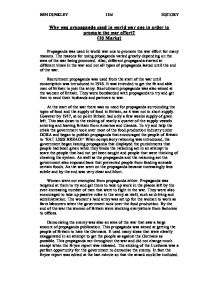 Why was propaganda used in world war one in order to promote the war effort?

Why was propaganda used in world war one in order to promote the war effort? (10 Marks) Propaganda was used in world war one to promote the war effort for many reasons. The reasons for using propaganda varied greatly depending on the area of the war being promoted. Also, different propaganda started at different times in the war and not all types of propaganda lasted until the end of the war. Recruitment propaganda was used from the start of the war until conscription was introduced in 1916. It was intended to get the fit and able men of Britain to join the army. Recruitment propaganda was also aimed at the women of Britain. They were bombarded with propaganda to try and get then to send their husbands and partners to war. At the start of the war there was no need for propaganda surrounding the topic of food and the supply of food in Britain, as it was not in short supply. ...read more.

As the war went on the propaganda became increasingly less subtle and by the end was very clear and blunt. Women were not exempted from propaganda either. Propaganda was targeted at them to try and get them to take up work in the places left by the ever-increasing number of men that went to fight in the war. They were also encouraged to take up passive roles in the army as well, such as driving and administration. The women's land army was set up for the women to work as farm labourers when the government took over the food production. By the end of the war the women of Britain were working everywhere from factories to offices. Demonising the enemy was also an area of the war that saw a large amount of propaganda publication. This propaganda was aimed at getting the people of Britain to hate the Germans. ...read more.

Because of this the government had a huge budget deficit. The government realised in 1917, that it could not go on the way it had been. They decided to issue an appeal for money in the way of propaganda to get the wealthier families and households to donate money to them. They asked people to take out war bonds that could be paid back at the end of the war. Without the propaganda the country would have gradually fallen into chaos. The propaganda relayed important messages and re-enforced the public opinion as a whole to help those who were starting to lose hope regain it. After the Christmas of 1914 the people of Britain began to settle into a rhythm and got used to the conditions of the war. This rhythm was kept in check by the propaganda, as the other factors that would have affected people's judgement would not have been enough to see them through the war. Word Count: Question 1 - 784 Question 2 - 1120 ?? ?? ?? ?? BEN DUNKLEY 11M HISTORY ...read more.