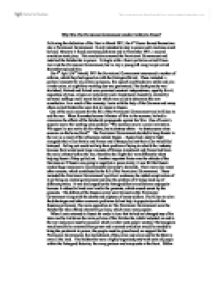 Why Was The Provisional Government Unable To Stay In Power?

Why Was The Provisional Government Unable To Stay In Power? Following the abdication of the Tsar in March 1917, the 4th Duma formed themselves into a Provisional Government. It only intended to stay in power until elections could be held. However it faced enormous problems and in November 1917, a second revolution took place. This revolution removed the Provisional Government and installed the Bolsheviks in power. To begin with a liberal politician called Prince Lvov led the Provisional Government, but in July a young left-wing lawyer called Kerensky replaced him. On 4th April (16th March) 1917 the Provisional Government announced a number of reforms, which they had agreed on with the Petrograd Soviet. These included: a political amnesty for all political prisoners, free speech and freedom to strike and join a trade union, an eight hour working day was guaranteed, The death penalty was abolished, Finland and Poland were promised eventual independence, equality for all, regardless of class, religion or nationality and a Constituent Assembly, elected by universal suffrage and a secret ballot which was called to determine the new constitution. As a result of the amnesty, Lenin with the help of the Germans and many others exiled Bolsheviks were able to return to Russia. One of the main reasons for the fall of the Provisional Government was its failure to end the war. ...read more.

be needed to bring the proletariat to power, the people must be given bread, no support for the Provisional Government, the abolishment of the police and army and for the State to own all the land. The Bolsheviks were a highly organised party with units of people within the Petrograd factories, the army garrison and army units at the front. Within Petrograd and under the leadership of Trotsky (who later became the leader of the Petrograd Soviet they formed their own groups of armed men called the Red Guard. They had their own newspaper called the Pravda, which Stalin played a key role in running. The Bolsheviks had a major role in Petrograd Soviet and then in September they took control of it. The Bolsheviks had a very appealing slogan, which was Bread, Peace, Land and all power to the Soviets. This slogan became very popular in the summer of 1917. The "Bread" stood for the need to feed the growing population of Petrograd, the word "Peace" became very powerful after the failure of Kerensky's June offensive and the threat of the German naval force to Petrograd. The "Land" was for: in the countryside where there was a widespread breakdown of law and order as peasants took control of their land from the aristocratic landlords who they worked for. ...read more.

Then the cruiser "Aurora" sailed up the River Neva and shelled the Provisional Government who were in the Winter Palace. By the 8th November the Winter Palace and the railway stations to the north were captured. Fortunately the Bolsheviks met no significant opposition in Petrograd and the coup was almost bloodless, only six soldiers were killed at the Winter Palace, but Kerensky escaped. The reasons for the Bolshevik's success included: in many respects they were fortunate due to the mistakes of the Provisional Government and Lenin made sure that they took advantage of these mistakes. The appeal of Bolshevism and Lenin's slogan "Peace, Bread, Land" brought support while Lenin ensured the timing of the revolution was just right. The main reasons were the careful Bolshevik preparations, under Trotsky and the strategy used to seize the key points in Petrograd. In conclusion the Provisional Government had been unable to deal effectively with the problems facing Russia. They had failed to end the war, to solve the food and fuel shortages, to solve the problem of land and to call a Constituent Assembly. They had not convinced the Russian people that they had gained anything from the February/March revolution. In addition and perhaps more importantly, they failed to recognise and appreciate the real nature of the threat presented by the Bolsheviks under Lenin (a superb organiser and dynamic leader) and Trotsky (a brilliant planner and thrilling speaker. ...read more.