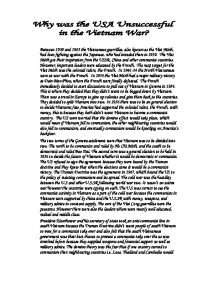 Why was the USA Unsuccessful in the Vietnam War?

Between 1939 and 1945 the Vietnamese guerrillas, also known as the Viet Minh, had been fighting against the Japanese, who had invaded them in 1939. The Viet Minh got their inspiration from the USSR, China and other communist countries. However, important leaders were educated by the French. The next target for the Viet Minh was the colonial rulers, the French. In 1946-54 the North Vietnamese were at war with the French. In 1954 the Viet Minh had a major military victory at Dein Bien Phou, where the French were finally defeated. The French immediately decided to start discussions to pull out of Vietnam in Geneva in 1954. This is where they decided that they didn't want to be bogged down by Vietnam. There was a trend in Europe to give up colonies and give them back to the countries. They decided to split Vietnam into two. In 1956 there was to be an general election to decide Vietnams fate America had supported the colonial rulers, the French, with money, this is because they both didn't want Vietnam to become a communist country. ...read more.

The national liberation front (N.L.F) were the communists operating in south Vietnam, they were allies of the north Vietnamese (V.C - Viet cong) and were against the south Vietnamese government and U.S.A. So the NLF and VC worked together. It was mostly peasants that made up the NLF who wanted to overthrow the South Vietnamese government and unite Vietnam. The events in Laos worried the U.S.A because there was also communist activity. Laos was a neighbouring country to Vietnam and the rebels in Laos were supplying weapons to the communist guerrillas in Vietnam. The Viet Cong gueillas in South Vietnam were. The Viet Cong guerrillas in South Vietnam were getting their support from North Vietnam, the U.S.S.R., china and Laos's rebels. Kennedy sent an increasing number of advisors to help Diem because Diem was very unpopular. He was making bad decisions (i.e. the Buddhists and the hamlets). The decisions he made were very unpopular so America sent advisors into help him defeat rebels. He was publicly embarrassing for the U.S.A. America was particularly keen to take a tough stand in Vietnam after their failure in Cuba because in Cuba the Americans were forced to back down over Cuba they were forced to back down over Cuba after the bay of pigs. ...read more.

Nixon's behaviour in 1970 and 1971 upset the U.S. public opinion because he critisised the young anti-war demonstrators in America he called them "bums". He wasn't very sympathetic about the kent state shooting when four died. Linebacker 1 and linebacker 11 were massive bombing campagns, more bombs were droped in linebaker 1 and 11 than in the rest of the whole Vietnam war. The U.S didn't realy withdraw from vietname with honour because they fought for years and years and hadn't achieved anything. So people new America was withdrawing because they couldn't beat the viet cong. The Vietnam war damaged U.S standing in the eyes of its own people and the rest of the world because it was overrub by the V.C communists. The country was reunited as it still is today. It brought home to Americans that they couldn't win every war they were involved in. as for the world, it damaged U.S reputationas a country that stood for what was right and is fair. The view shown in U.S films depends on which one you're watching, however nearly all of themshows the war from thre U.S point of view. Some films glamourise the war where as some films are realistic. The group of people who don't have an opportunity to tel their side of the war are the Vietnamese peasants. ...read more.