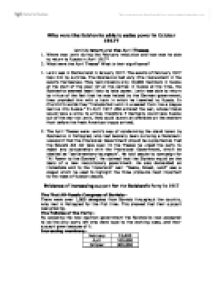 Why were the Bolsheviks able to seize power in October 1917? Lenin's return and the April Theses 1. Where was Lenin during the February revolution and how was he able to return to Russia in April 1917? 2. What were the April Theses? What is their significance? 1. Lenin was in Switzerland in January 1917. The events of February 1917 took him by surprise. The Bolsheviks had very little involvement in the events themselves. They had probably only 10,000 members in Russia at the start of the year. Of all the parties in Russia at the time, the Bolsheviks seemed least likely to take power. Lenin was able to return by virtue of the fact that he was helped by the German government; they provided him with a train in which he travelled to Russia. ...read more.

2. The April Theses were Lenin's way of condemning the stand taken by Bolsheviks in Petrograd, who had basically been pursuing a Menshevik viewpoint that the Provisional Government should be supported so that the Soviets did not take over. In the Theses he urged the party to reject any co-operation with the Provisional Government, which he labelled as "parliamentary-bourgeois". He told people to campaign for "All Power to the Soviets". He claimed that the Soviets would be the basis of a new revolutionary government. He also demanded an immediate end to the 'imperialist' war: "Peace, Bread, Land" was a slogan which he used to highlight the three problems most important to the mass of Russian people. ...read more.

remaining loyal to the working class, their popularity increased o They were the only party that would bring about the changes needed for the Proletariat, as the other Marxists believed the bourgeois revolution would need time to settle before a second revolution could take place o Workers wanted control of the factories and the economy which the Bolsheviks offered o Because of the Kornilov Coup, the Provisional Government's weaknesses now were blatant to everyone. In the new Soviet elections in August and September the Bolsheviks won control of both the Petrograd and Moscow Soviets for the first time o He also appealed to the peasantry by offering them land, ideologically he did not want to give them land but was prepared to compromise his ideals to obtain his goal ...read more.