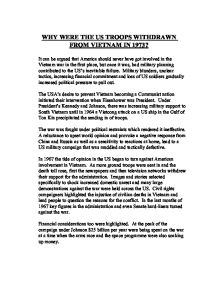 Why Were the Us Troops Withdrawn From Vietnam In 1973?

WHY WERE THE US TROOPS WITHDRAWN FROM VIETNAM IN 1973? It can be argued that America should never have got involved in the Vietnam war in the first place, but once it was, bad military planning contributed to the US's inevitable failure. Military blunders, unclear tactics, increasing financial commitment and loss of US soldiers gradually increased political pressure to pull out. The USA's desire to prevent Vietnam becoming a Communist nation initiated their intervention when Eisenhower was President. Under President's Kennedy and Johnson, there was increasing military support to South Vietnam until in 1964 a Vietcong attack on a US ship in the Gulf of Ton Kin precipitated the sending in of troops. The war was fought under political restraints which rendered it ineffective. A reluctance to upset world opinion and provoke a negative response from China and Russia as well as a sensitivity to reactions at home, lead to a US military campaign that was muddled and tactically defective. ...read more.

The situation reached its peak in 1968 following the 'Tet Offensive' by the Vietcong. This was a major attack on many towns and cities in South Vietnam, including the American embassy in Saigon. Americans at home were shocked that the Vietcong could launch such a massive attack after Johnson had insisted that they were nearly beaten and were incapable of such a feat. Because the media was now against Johnson's policies, the Newspapers and TV portrayed the 'Tet Offensive' as a Vietcong success. In fact the Vietcong suffered more than twice the losses than the US troops and the South Vietnamese did together. The little faith that remained in the government's handling of the war, was now lost, which lead to Johnson standing down as presidential candidate in the next elections. ...read more.

To bolster South Vietnam against further attacks from North Vietnam, Richard Nixon's Secretary of Defence initiated Project Enhance which was $2 billion worth of military equipment being rushed over to South Vietnam to strengthen their defences. Nixon's policy gradually reduced military involvement in Vietnam and on 27th of January 1973 a peace agreement between the US and North Vietnam was signed. By the end of March 1973, all U.S. fighting forces had been withdrawn. President Nixon gave assurances of future support to the South if the North were to breach the terms of the treaty but further military assistance to South Vietnam became politically impossible. One reason for this was the collapse of Nixon's political authority due to the Watergate scandal which eventually forced his resignation. To conclude, America pulled out of the war because it was war weary with no end in sight. The American people could no longer be persuaded that the war was either justified or winnable. Daniel Allan 11GS ...read more.