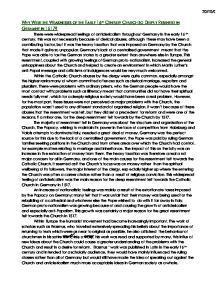 WHY WERE THE WEAKNESSES OF THE EARLY 16TH CENTURY CHURCH SO DEEPLY RESENTED IN GERMANY IN 1517?

WHY WERE THE WEAKNESSES OF THE EARLY 16TH CENTURY CHURCH SO DEEPLY RESENTED IN GERMANY IN 1517? There were widespread feelings of anticlericalism throughout Germany in the early 16th century, this was not necessarily because of clerical abuses, although these may have been a contributing factor, but it was the heavy taxation that was imposed on Germany by the Church that made it quite so unpopular. Germany's lack of a centralised government meant that the Pope was able to tax the German states to a greater extent than anywhere else in Europe. This resentment, coupled with growing feelings of German proto-nationalism, increased the general unhappiness about the Church and helped to create an environment in which Martin Luther's anti-Papal message and criticisms of indulgences would be very much welcomed. Within the Catholic Church abuses by the clergy were quite common, especially amongst the higher ranks many of whom committed offences such as clerical marriage, nepotism and pluralism. ...read more.

Germany was the perfect source for this due to the lack of a centralised government, the Pope was paid by ruling German families seeking positions in the Church and from others areas over which the Church had control, for example matters relating to marriage and inheritance. The impact of this on the laity was an increase in the extraction of money from them. The heavy taxation was therefore a real and major concern for all in Germany, and one of the main causes for the resentment felt towards the Catholic Church. It seemed as if the Church's focus was on money rather than the spiritual wellbeing of its followers, the major interest of the clergy, especially higher up where the entering the Church was often a career choice rather than a result of religious conviction. This widespread feeling of anticlericalism was the main reason for the deep resentment felt towards the Catholic Church in Germany in 1517. ...read more.

Erasmus' work was published in Latin in the early 16th century and intended for a scholarly audience, they would have mainly influenced the ruling classes rather than all of Germany but would still have made the idea of speaking out against the Church and anticlericalism much more acceptable ideas in German society as a whole. When Martin Luther pinned his Ninety Five Theses to the door of the church in Wittenberg in 1517 he was presenting his ideas to a very receptive audience. Heavy Papal taxation of Germany and the resulting increase in anticlericalism and proto-nationalism combined with minor concerns over abuses within the church created a real and deep resentment towards the Church. The works of humanist scholars, which were generally accepted and indeed welcomed by rulers in Europe, meant that feelings of anticlericalism and anti-Papalism were an accepted reaction and enabled the spread of resentment caused by intense taxation by a foreign power and abuses within in the Church resulting in the deep resentment felt towards the Church in 1517. ?? ?? ?? ?? 20/10/09 ...read more.