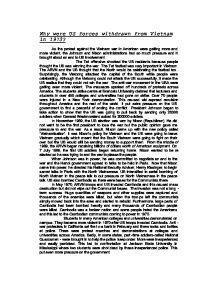 Why Were Us Forces Withdrawn From Vietnam In 1973?

Why were US forces withdrawn from Vietnam in 1973? As the protest against the Vietnam war in American were getting more and more violent, the Johnson and Nixon administrations had so much pressure and it brought about an end to US involvement. The Tet offensive shocked the US residents because people thought the US was winning the war. The Tet festival was very important in Vietnam. The ARVN and the US thought that the North would be celebrating the festival too. Surprisingly, the Vietcong attacked the capital of the South while people were celebrating. Although the Vietcong could not attack the US successfully, it made the US realise that they could not win the war. The anti-war movement in the USA were getting even more violent. The massacre sparked off hundreds of protests across America. The students strike centre at Brandeis University claimed that lecturers and students in over 450 colleges and universities had gone on strike. Over 70 people were injured in a New York demonstration. This caused widespread revulsion throughout America and the rest of the world. It put extra pressure on the US government to find a peaceful of ending the conflict. President Johnson began to take action to show that the US was going to pull back by sending only 20000 soldiers when General Westmoreland asked for 200000 soldiers. ...read more.

Students in many American colleges and universities demonstrated on campus. They became more violent in 1970 after US troops invaded Cambodia. Anti-war protesters in California set fire to a bank in February and threw rocks and bottles at police. There were protest marches and demonstrations at colleges and universities across America. Sadly, in some states, part-time soldiers-called National Guardsmen - were brought in to help the police keep order. More were inexperienced and easily panicked. This led to confrontation at Jackson State University in Mississippi where two students were shot dead by these inexperienced police. This put even more pressure on the government. In 1971, the morale of the soldiers became low. 61% of the soldiers were against the war. This is because the US army has withdrawn 400000 troops leaving behind only 140000 soldiers. Even though Nixon promised all of the soldiers would leave Vietnam in 1972, they did not want to be the last one to die in the battle. Also, some of the soldiers thought it was pointless to fight and they did not want to kill the civilians. Search and destroy missions became a search and avoid operations. Over enthusiastic officers were threatened and even murdered. ...read more.

This made the chance for a negotiated peace was looking brighter than they had for many years. In October of 1972, the talks between Kissinger and Le Duc Tho, a Hanoi leading member the North Vietnamese government, was a success. Hanoi and the USA agreed to a cease-fire in place in South Vietnam. This meant that the soldiers of both sides would remain in their positions when the fighting stopped. The cease-fire proposal proved to be unacceptable by president Thieu and the Saigon regime. They saw the agreement as a sell out by the Americans. After President Nixon won a landslide victory in the election of November, his government persuaded Thieu into accepting the terms of the agreement by threatening to reduce US aid. Protests were getting very enormous and violent in Washington. Therefore, Nixon was determined to achieve an agreement in the quickest possible time. He ordered a massive escalation in the bombing of the north to try to force the communists back to the negotiating table. Nixon was also showing president Thieu that he could rely on US support even after withdrawals. The Christmas bombing of 1972 lasted eleven days and 200000 bombs were dropped on the cities of Hanoi and Haiphong. Although North Vietnam denies it, the bombing probably did force North Vietnam to the talks and a cease-fire was finalised quickly on 23 January 1973. ...read more.