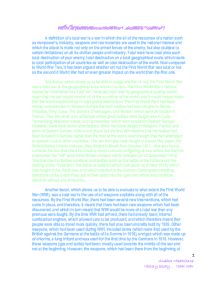 With what justification can World War 1 be called a &quot;Total War&quot;?

With what justification can World War 1 be called a "Total War"? A definition of a total war is a war in which the all of the resources of a nation such as manpower's, industry, weapons and raw materials are used in the national interest and which the attack is made not only on the armed forces of the enemy, but also (subject to certain limitations) on all its civilian people and industry. Total wars have total aims such total destruction of your enemy, total destruction on a total geographical scale, which leads to total participation of all countries as well as total destruction of the world. Now compared to World War Two, it has been argued whether ort not the First World War was total or not as the second d World War had an even greater impact on the world than the first one. One factor, which allows us to be able to judge whether or not, the First World War was a total war is the geographical area, which it covers. The First World War, I believe, cannot be considered as a total war, because total; was by geographical scaling would mean that the war would involve all of the countries of the world, and it would indeed mean that the world would end up in total global destruction. The First World Wart had been mainly concentrated in Western Europe the main battles had been fought in, Neuve Chapelle, Vimy, Loos, The Somme, Champagne, and Verdun, which were all located in France. ...read more.

In terms of mobilization of finance and industry, one could claim that WWI was indeed a total war, but at the same time, one has to consider the fact that the mobilization of finance and industry (for some countries) did not take place until the 1915-1918. By the 3rd of August 1914, Walther Rathneau had persuaded Falkenhayer's War Ministry to set up a War Raw Materials Department (KRA) and this had been designed to have all the raw materials including labour to be officially declared as a state of emergency. This meant that all of these resources would be going towards war production of which the military had first priority. Any raw materials, which were unavailable, were often procured in foreign or occupied countries, and German scientist were being given a lot of support in developing substitute products seeing as certain resources were beginning to run scarce. During this reallocation of resources, the whole of the German industry including a series pf Raw Materials Companies were co-opting into the whole war production industry. The food was also being focused in the military side, as in January 1915; the Imperial Grain Office introduced bread rationing, followed by the rationing of all foodstuff, which was because all food, which was being produced, had been going towards fighting the war, and therefore lead to food shortages in Germany. By September 1914, Germany had reorganized the nation's industry into 12 regions and distributing massive orders for thousands of shells and guns. ...read more.

On of these factor s was political which resulted in the collapse of the German, Russian, and Austro-Hungarian Empire. The Ottoman Empire was one of the largest in Europe and its collapse resulted in newly formed "successor states" such as Austria, Hungary, Czechoslovakia, indirectly Poland and Yugoslavia. In Russia, the Tsarist regime had been overthrown and replaced by a most radical regime in Europe, which was to have an impact on the rest of Europe over a period of 75years. Not only had there been political changes after the war, there had been some social changes which had taken place as well, such as the role of women in the society. The participation that women had during the war had been enormous, and that lead to them finally being recognised as equals in the society. The stereotype attitude that "a woman's place is at the home" had altered. Woman, during the war, no longer stayed home and cooked, instead they began to do the jobs, which the men (in the army-fighting the war) were previously doing, which were mainly working in the industry to produce armaments for the men who were working in the battlefield. In places like France-25% of the labour force droning the war was a female. After the war, there was another transformation with the role that women could play in society. After the war, females were allowed to join the army, and they in fact even set up an organisation called the WAAC () which allowed the to work and serve in the army...something which was previously not allowed. 1 Anelisa Mkatshane History Essay... Total War ...read more.